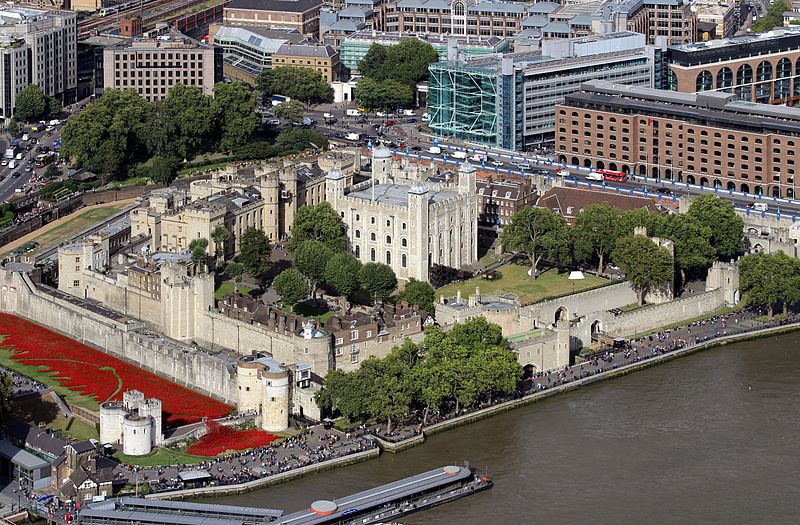 The central White Tower building inside the Tower of London was built by William the Conqueror in 1078.  It has played a prominent role in English history. It was besieged several times, and controlling it has been important to controlling the country. The Tower has served variously as an armoury, a treasury, a menagerie, the home of the Royal Mint, a public record office, and the home of the Crown Jewels of England.

Astrogeographic position of the Tower of London fortress for morphogenetic field level 4 which describes the energetical situation and topics of the whole fortress: The Tower of London has one coordinate in Scorpio the indicator for its fortress character. The second coordinate here lies in aristocratic air sign Libra the sign of royal courts, harmony, symmetry, justice, balance, beauty and relationship. Libra stands for the important

Astrogeographic position of the White Tower for morphogenetic field level 4 which describes the energetical situation and topics of the central dungeon tower itself: the White Tower is located in highly defensive, solid fixed water, mental water sign sign Scorpio the sign of closed-up containers, strongholds, dungeons, the underworld, death, torture, pressure, trauma, graveyards. The 2nd coordinate lies in self-protective, emotional water sign Cancer the sign of emotional autonomy and self-centeredness. Both signs Scorpio and Cancer – though for very different motives are known for their intensely defensive reflexes. Both signs are strongly related to physical as well as emotional pain. In this case Cancer also refers to the position next to the river bed as the natural habitat of crabs. The position in Cancer the sign of the roots of english culture also explains the construction site as a place of resonance of topics related to the english home land and all things having to do with english culture.

Comparison:  The topic of the highly defensive reflexes visible with buildings located in Cancer can be found also in this article: A WW2  “flak” tower in the sign of the crab .