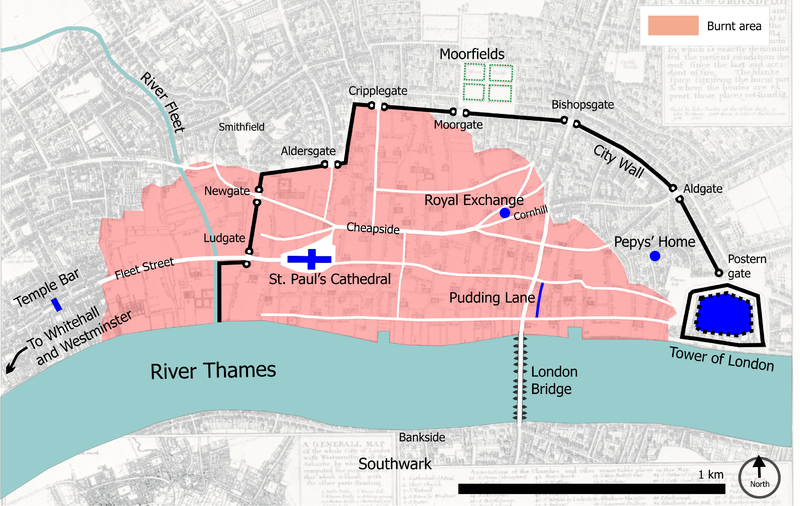 “The Great Fire of London swept through the central parts of the city of London from Sunday, 2 September shortly after midnight to Wednesday, 5 September 1666. The fire gutted the medieval City of London inside the old Roman city wall,  threatened but did not reach the aristocratic district of Westminster, Charles II’s Palace of Whitehall, and most of the suburban slums. It consumed 13,200 houses, 87 parish churches, St Paul’s Cathedral, and most of the buildings of the City authorities. It is estimated to have destroyed the homes of 70,000 of the City’s 80,000 inhabitants.

Order in the streets broke down as rumours arose of suspicious foreigners setting fires. The fears of the homeless focused on the French and Dutch, England’s enemies in the ongoing Second Anglo-Dutch War; these substantial immigrant groups became victims of lynchings and street violence. On Tuesday, the fire spread over most of the City, destroying St Paul’s Cathedral and leaping the River Fleet to threaten Charles II’s court at Whitehall, while coordinated firefighting efforts were simultaneously mobilising. The battle to quench the fire is considered to have been won by two factors: the strong east winds died down, and the Tower of London garrison used gunpowder to create effective firebreaks to halt further spread eastward.”

Astrogeographic position for morphogenetic field level 1 which shows the supraregional and international qualities of the region of London: the City of  London is located at 24° of aristocratic, courtly air sign Libra and 27° of conservative, hierarchical earth sign Capricorn.

In the astrological event chart for the moment the Great London Fire broke out Jupter ruler of Sagittarius the sign of arsonist was conjunct midheaven.  Hie rulership of house 6 the house of strategical planning is an indication of a carefully planned and carried out arson attack. The same accoounts for the square Mercury`s square to Saturn as  Mercury is a clear indicator of deliberate action.

At the time of the Great Fire Venus the ruler of Libra was at 25°31` Libra exactly conjunct the position of London at 24° Libra. The position of Venus leads to the question whether the catastrophy was caused on purpose for profits to be made from the reconstruction. Venus` position stands for a consolidation process through the reconstruction and not for the damage done by the fire. Altogether Venus` conjunction with London during the Great Fire stood for renovation, progress, profits and renewal of structures.

The coming exact conjunction of Saturn with Neptune a symptomatic constellation of the suppression and scapegoating of minorities took place only 4 months adter the Great London Fire. It stands for the violence against minorities that broke out as a coinsequence of the disaster here.

The  Monument to the Great Fre of London

The  Monument to the Great Fre of London was constructed between 1671 and 1677 on the junction of Monument Street and Fish Street Hill on the site where the ist church had been destroyed by the fire.  The Monument is 62 m tall and located exactly 62 m to the west from the spot in Pudding Lane where the Great Fire had started on 2 September 1666.

Astrogeographic position of the Monument to the Great Fre of London for morphogenetic field level 4 (exact adress) which describes the atmosphere and topic of the place itself: The Monument has both coordinates in fire sign Aries the sign of ignition, action, speed, aggression and warfare. The site of the former bakery on Pudding Lane in which the fire was started lay in Aries with Taurus the sign of market places, food, wheat flour and an interesting astrological combination for a bakery.

Astrogeographic position the Golden Boy of Pye Corner for morphogenetic field level 4 (exact adress) which describes the atmosphere and topic of a place itself:   The location has both coordinates in practical air sign Gemini sign of intelligence, learning, communication and roads. Gemini also represents the astrological equivalent to the defense-system.