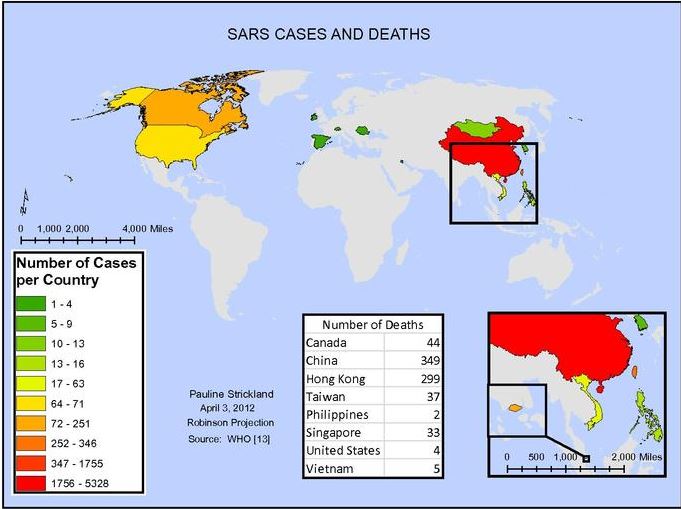 Severe acute respiratory syndrome (SARS) is a viral respiratory disease of zoonotic origin caused by the SARS coronavirus (SARS-CoV). Between November 2002 and July 2003, an outbreak of SARS in southern China caused an eventual 8,098 cases, resulting in 774 deaths reported in 17 countries, with the majority of cases in mainland China and Hong Kong  (9.6% fatality rate) according to the World Health Organization (WHO). No cases of SARS have been reported worldwide since 2004. In late 2017, Chinese scientists traced the virus through the intermediary of civets to cave-dwelling horseshoe bats in Yunnan province

Midday charts are useful to show the medium planetary positions of the day. They can also be interpreted as indicating charts for the central topics of any day. It is remarkable here that Neptune was rising exactly conjunct the Ascendant as part of the central topics of the first day of the SARS pandemic at the place of its outbreak. Neptune stood for the reconnection of society with the fuller holistic dimensions of its potentials.

The opposition of the two places and its relatedness over a time span of 17 years through the Neptune transit suggests an overall process of learning of the humanoid defense system in dealing with its capacity to stimulate the development of the human system, psychosomatic learning and handling discrepancies between the 4 bodies: material, emotional, mental and spiritual.

Pluto conjunct Beijing: Aspects of the SARS outbreaks for the National Morphic field of China

Compare: The astrogeographical position of Beijing

According to my calculation the astrogeographical resonance coordinates for the center of the national morphic field of China at Beijing are 3°Leo and 17°Sagittarius.

The astrogeographical transits for the Fushan SARS outbreak of 2002 and Wuhan Coronavirus outbreak of 2019 reveal an intense direct relation to the center of the national morphic field of China in Beijing.

The first SARS outbreak in China occurred during the transit of Pluto at 16°Sagittarius exactly conjunct the 17°Sagittarius resonance coordinate of Beijing. This Pluto transit stood for the end of an era of a full Pluto cycle of 248 years in regard to the Sagittarius topics of the Chinese capital.

The last transit had occurred during the Golden Era of the reign of Emperor Qianlong (1739-1796. Pluto the planet of the strife for power and in Sagittarius seems to mark eras of the strife for and the unfolding of an extreme dominance and growth of the role of the central capital Beijing along with of the expansion and booming economy in the national morphic field of China.

The 17° Sagittarius resonance coordinate of the center of the national morphic field of China so stands for the potential of Chinese society of rapid growth, unhindered expansion, booming economy, extreme profits and success and the expansion of the rule of a caste of super- lobbyists and profiteers. As the sign of lobbyism Sagittarius plays an even more important role here also in China`s ability to manipulate global markets through its low-price and low money value politics that was able to outrun any other industrial nation on our planet due to the government controlled centraliized state capitalist system. The super centralism of Beijing is to be examined as part of the effects of the Leo correspondence that directly relates Beijing to other super-centralist global players such as Washington, Riyadh, New-Delhi and Pyongyang.

Regarding this Pluto transit the SARS outbreak of 2002 seems to have occurred as a symptom and part of a restructuring process and transformation of Chinese society in the wake of the era of Chinese appeal to global financial and economical dominance based on 20 years of a booming economy and unhindered pollution.

This is also because the Sagittarius resonance coordinate of Beijing relates to the ideal of unhindered expansion of the self-image and hegemony of the Chinese capital and also of its national morphic field.

At the same time Jupiter as the sign ruler over Pluto and the 17° Sagittarius resonance coordinate of Beijing was in exact trine to Pluto and in self-centered Leo the sign of absolutism explaining the craving for unhindered expansion and self-centeredness as a major reason for the need for a regulative experience and stimulation through the information of the SARS autoimmune deficiency of Chinese society.

Compare: The astrogeographical resonance coordinates of Hongkong at 20°Scorpio and 6°Libra.

SARS arrived in Hong Kong in February 2003, when a doctor and lung-specialist who had treated some of the cases of SARS at Sun Yat-Sen Memorial Hospital in Guangdong came to attend a family gathering. Dr. Liu Jianlun, Hong Kong’s index patient, checked into the Metropole Hotel on February 21, with a room on the ninth floor, specifically room 911.

The Sun-Uranus conjunction with the Sun position on a degree of a liver depression (2°Pisces) during the process of the arrival of SARS at the Hong Kong metropolis and the subsequent fast international spreading of the virus after are a strong astrological image for a virus contamination. The role of Uranus the planet of globalization may be examined here through the analogy of his role as the sign ruler of Aquarius the sign of the water-spreader, inspiration and rain with droplet infection.

The conjunction of Mercury indicator for contacts and the respiratory organs with Neptune appears as another direct indicator here. At the same time there were two more conjunctions to be considered:

The conjunction of Venus with Chiron the indicator for doctors in the center of Capricorn the sign of public space, obligations, relates to the over strain of the doctor and lung specialist who though he already carried the virus did not decide to stay home and seek recovery.

The conjunction of Mars with Pluto in Sagittarius the sign of expansion and travelling explains the aggression behind the spreading of the virus through this particular chain of events.