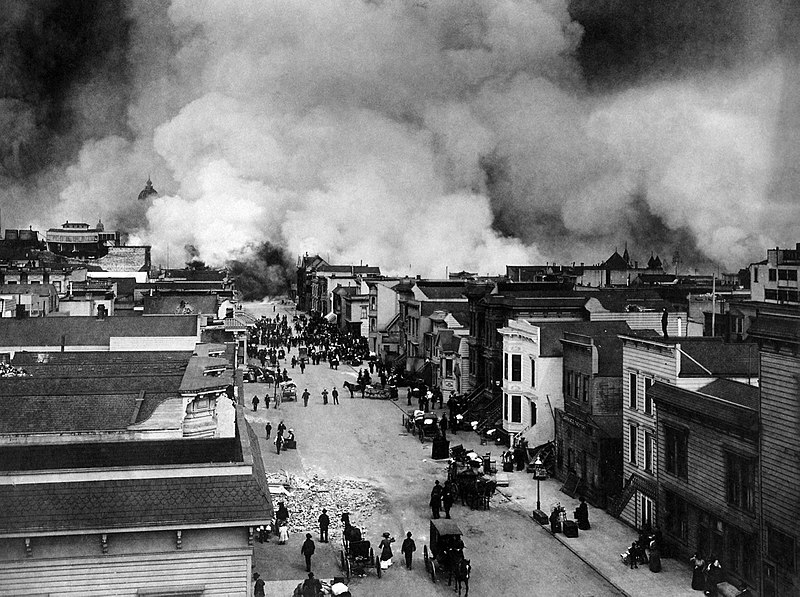 Related articles: San Francisco and the divide between morphogenetic fields, The 2018 Sulawesi earthquake and tsunami in astrology, The Lombok earthquakes of 2018, 2018 earthquake at Mt. Kilauea, Popocatepetl in astrological vulcanology, The Haiti Earthquake on 12 January 2010, Kaohsiung Earthquake on 6 Feb 2016, Supertyphoon Yolanda, San Onofre, Crimea Earthquake, Krakatoa and the extreme weather events of 536 AD,The Fukushima, The Nepal Earthquake on 25 April 2015, Mount Pinatubo Eruption. The 2017 Puebla earthquake, A rupture at the major faultlines on the US West Coast.

The two San Francisco earthquakes are typical examples of events caused by the tension between surface structures (above epicenter) (10th house) and the structures below the ground (and/or the below epicenter) (4th house). Planetary positions on these two axes of event charts are absolutely symptomatic of earthquakes and volcanic eruptions.

Astrogeographical resonance coordinates for San Francisco for morphogenetic field level 1 which describe the global, supra-regional, nation wide topics of the city and of events in the town area: San Francisco is located at 22°/23° in earth sign Virgo and 0° in earth sign Capricorn.

The San Francisco earthquake of 1906

The 1906 San Francisco earthquake struck the coast of Northern California at 5:12 a.m. on Wednesday, April 18 with an estimated moment magnitude of 7.9 and a maximum Mercalli intensity of XI (Extreme). Devastating fires soon broke out in the city and lasted for several days. As a result, up to 3,000 people died. Over 80% of the city of San Francisco was destroyed.

The San Francisco earthquake on 18 April 1906 was one of the first major catastrophes in urban centers of modernity. Neptune near the IC – indicator of the ground below the epicenter – could indicate dissolving of structures and inflow of liquid material (magma, sea water) below and only a few km east (house 3) of the epicenter.

The gravitational pull exerted by the position of the heavy-weights Sun, Moon, Jupiter, Saturn and also Mars-Venus and Mercury all of them from eastern directions seems to have finally triggered the earthquake by pulling the Pacific Plate towards the North American Plate – while at the same time – the fault-line itself was destabilized by Neptune below the epicenter (IC) and Uranus (MC) above it.

Uranus in tight opposition to Neptune at mid-heaven indicates a sudden discharge of tension above the epicenter resulting in material being pressed in upward direction.

Faster moving Mercury in exact square to these two outer planets because in a position in the east indicates movements or spaces for movements on the side of the North-American Plate to the east of the epicenter at the San Andreas Fault.

Pluto in exact square plus mirrorpoint squares from Uranus and Neptune

Pluto at 21°Gemini in exact square transit to the 22°Virgo resonance coordinate of San Francisco was the strongest planetary pressure on the astrogeographical position of San Francisco. Pluto indicates movement of particularly hard material and of magma as well as pressure on magma chambers.

At the same time a number of strong transits affected San Franciscos 22°Virgo resonance coordinate through critical squares via mirrorpoint positions of Uranus at 8° Capricorn (22°Sagittarius), Neptune at 8° Cancer (22°Gemini) and Mercury at 8° Libra (22° Virgo).

The Loma Prieta earthquake of 1989 occurred during the exact transit of Uranus an important astrological factor in the discharge of stored tension between tectonic plates exactly over the 1°Capricorn resonance coordinate of San Francisco. The Uranus ingress into Capricorn seems to have acted as the triggering factor for an event of restructuring of tectonic materials in below the San Francisco part of the fault line.

The T-square of Jupiter at 10°Cancer with Mercury at 9°Libra and the Neptune-Saturn conjunction between 8° and 9°Capricorn conjunct the 8° Capricorn position of Uranus from the the Great 1906 earthquake reveals a strongest possible resonance with the Great 1906 San Francisco earthquake. This overall constellation suggests that the status quo at the tectonic fault created in 1906 was destabilized and “revised”.

In the case of the “1989 Loma Prieta earthquake” the typical tension indicated by an opposition of planets between houses 4 and 10 occurred between Jupiter in Cancer (a spring of unsolid material) below the west of the epicenter (IC-MC Line) and the Neptune – Saturn (destabilization of solid material) conjunction above. Again Mercury an indicator for mobility of solid material took the position of a tight square to Neptune, this time from the west (house 7).

The epicenter of the Loma Prieta earthquake was located at 8° of the earth sign Capricorn and 11° of the air sign Libra. The astrological transits of the astrogeographic positions are outstanding in this case.

I found the idea fascinating that the square of the Saturn-Neptune conjunction near 9°Capricorn to Mercury at 9° Libra could even be a potential indication of how the earthquake was triggered by the flow of energies. information or other manifested form of resonance through the morphic field.

Important astrogeographical transits to be observed are:

The climax of Neptune`s transit in exact opposition to the 22°Virgo resonance coordinate of San Francisco will occurr between February 2021 and March 2023.

Neptune as an indicator of destabilization of material will enter into the climax phase of his the exact opposition to the 22°Virgo resonance coordinate of San Francisco and can be expected to stimulate such type of processes affecting the area below San Francisco between Feb. 2021 and March 2023. As Neptune does not indicate hard material the destabilization caused may not be expected to result in discharge of tension through heavy quakes in the first place.

Therefore technically a “Big One” may not be expected as the movement of hard material as through Pluto, Saturn or Uranus is not indicated before Saturns opposition, square and mirror-point square transits to the 22°Virgo resonance coordinate between February 2026 and February 2027.