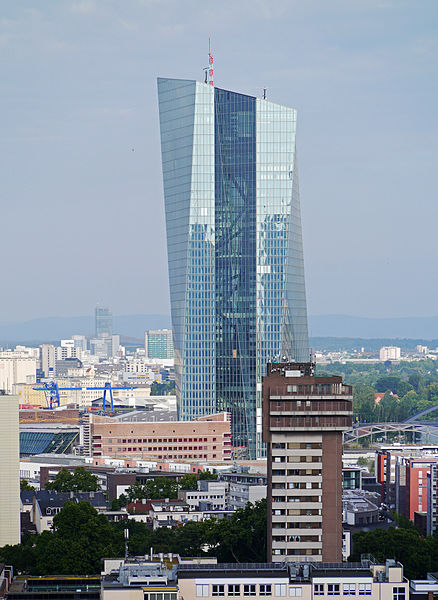 Related articles:  Psychro Cave the birth place of Zeus,  The parliament of the European Union in Brussels, New York Stock Exchange in Astrogeography,

The natal chart for the European Central Bank

I think the chart for June 1 1998 concentrates on the competition in the markets and the extreme amount of stress, competition and expectable attacks from the global monetary players under which the foundation took place.

The Moon conjunct the North Node on 6°Virgo indicates that the actual aim of the European continental countries was to create a system of self-protection and economical stability against the dependence on the Dollar and other global currencies like the Pounds, Rubles and Yuans of the world. That is reflected in the exact square to the Mars-Pluto opposition between the 6°Gemini and 6°Sagittarius axis on the zodiac degrees of manipulation and black magic. That does not mean the ECB is not aimed at using manipulation. In fact the overall planetary constellation reveals the readiness and aim of doing so. But the first aim appears to be stabilization against current threats, pressure and manipulation of markets by the already existing global players.

The Euro and ECB have to be understood as children of the Perestroika era – a time that put pressure on the USA to allow a certain amount of European independence during the Clinton presidency. The Bush and Obama presidencies changed that course with the long term attacks on the Euro since 2007.

Uranus in Aquarius in a trine aspect to the Sun in Gemini makes the globalization of globalization (!) – meaning its decentralization from the control of the Moscow-Washington polarity appear as a central motif.

The European Central Bank in astrogeography

Astrogeographical resonance coordinates of the ECB and the City of Frankfurt for morphogenetic field level 1 which describe the supraregional, european and worldwide topics, meaning and resonance of the institution: the significators are 27°-28° Scorpio and 16°Taurus

The second coordinate of the ECB right in the middle of solid, fixed, highly magnetic, profitable earth sign Taurus the sign of the earth, money, income, food, agriculture, grounding, roots, market places describes the role of the City of Frankfurt as a central market place, banking capital of Germany and continental Europe and also the seat of the German Stock Exchange (DAX).

The European Central Bank`s new twin towers designed by austrian architects COOP Himmelblau in Frankfurt were officially opened on 18 March 2015. It`s North tower is 185 m and the South tower 165 m. One question here is: what is the indication of the fact that the north tower is taller than the south tower ? Is that an allusion to the confrontation of the economical roles of the 2 halves of the continent and the dominance of the North over the South?. And if so who is responsible for that architectural definition?

The ECB Building for Field Level 3: Capricorn with Pisces – stabilization or destabilzation?

Astrogeographic position of the new ECB building for morphogenetic field level 3 which describes the buildings themselves and the way they are embedded in the landscape: the construction is located in highly defensive, hierarchical, strict, conservative earth sign Capricorn sign of political stability, control, authority, rules and regulations, the ruling classes and of government insitutions in general.
2nd coordinate in relaxed, mystic, spiritual water sign Pisces sign of legends, mystification, fairy tales, hiding, illusions, temples, italian culture, the catholic church and an indicator for destabilization + corruption. Pisces could stand for the amalgamation of the  different european cultures and national identites.

What does the ECB and the birth place of Zeus have in common?

The central building of the European banking system and the greek godfather share one aspect: Both are closely related to the degree of 27° Scorpio for morphogenetic field level 1. The morphogenetic resonance between the site of the ECB in Frankfurt and the site of the birthplace of Zeus on the island of Crete is a fascinating constellation in regard to the problematic situation between the European Banking System and Greece before and during the European Debt Crisis since 2009.  If any social group in Greece might be archetypal of this apect of Zeus it would be the superrich greek ship owners.
Field level 1 – the global indication of the astrogeographic position of Psychro Cave:  Zeus was born in his own territory (Sagittarius) and in the position of the strongest among the tyrants (27° Scorpio)

For field level 1 which describes the global meaning of Psychro Cave the place is located at 5° of the mental fire sign Sagittarius, an aspect which indicates that Zeus would have been born in his own sign or field and not in exile here. The 2nd coordinate of global importance falls on 27° of defensive, hierarchical, fixed water sign Scorpio.

The Introduction of the Euro

I wasn`t aware that Jupiter was conjunct the 21° resonance coordinate of Brussels during the first step in the introduction of the Euro. Neptune is currently in the process of a conjunction transit with Brussels. That transit became effective in March 2020 together with the Covid 19 pandemic. Neptune stands for the confrontation of national morphic fields with the terrestrial and cosmic field – and is in his own sign Pisces which qualifies Brussels for the capital of the EU.

The conjunction of Venus as ruler of territorial possession and control and of money with Neptune as ruler of the cosmic morphic field is symptomatic in early EU charts. It is prominent in house 4 too in the Treaty of Maastricht chart explaining the end of the iron curtain and the association of former Soviet controlled eastern European nations with Western Europe. It has to be understood as a symptom of the issue of an organisation dedicated at dealing with international relationships. That means ending war, hate, destruction and settling questions of disputed territories.

Saturn as house 4 (national morphic field) ruler over Venus & Neptune plus sign ruler over Venus meant stabilizing a deal in which nations give up their currencies to join them with other nations (Saturn in house 8). Technically in order to create mechanisms for a common market under the strategical management of Jupiter in house 6 in Pisces (holistic crisis management).

The current transit process of Saturn in his own sign and together with Jupiter (SA-JU – golden seal) conjunction in transit of Venus explains a process of stabilization of Venus through Saturn under Jupiter`s crisis management. The decision to make common debts for the first time ever in EU history taken on 20 July 2020 with the Jupiter at 21° and Saturn at 28°Capricorn with their half sum just near the 25° Cap position of Venus from the Euro introduction sealing the closer relations between richer and poorer nations.

The long term transit of Pluto into house 4 of the Euro began with the ingress in Capricorn in January 2008. As the ruler of house 3 Pluto stood for the effects from the World financial crisis and the attacks on the European currency through global speculation. The sentence framed by a Wall Street expert that the Euro was a rooster with its head chopped off – that it was dead and simply continues running for a while can be understood as symptomatic of the castration under the transit of Pluto (foreign control) into house 4 (EU morphic field).

As the ruler of house 3 – house of competitors and neighbors (USA, Russia, China) Plutos transit in house 4 of the Euro stands for attacks on the currency in capitalist market competition. One climax was the transit over the sun position in 2013/14 with heavy losses caused by the Euromaidan revolution, Russian annexation of Crimea and the foundation of the Neo-Fascist International between Russia and US Republicans.

The climax of this transit of Pluto conjunct Venus is effective but will reach its climax in the coming winter wave of Covid 19 to be expected between Nov. 14, 2020 and April 2021. This Pluto transit will last from January 2021 until March 2022 meaning that the Covid 19 crisis explain the scenario under which new debts will have to be be made – with Pluto as general technical indicator of debts. Pluto will square Saturn and put the stability of the Euro pact under pressure – but with Saturn representing its planetary ruler. Meaning that the stability of the pact would have to finally decide how much common debts will be made.

The resonance with the positions of the Board of Governers of the US Federal Reserve Bank, World Bank and  International Monetary Fund all in Washington

The World Bank Group is a family of five international organizations that make leveraged loans to developing countries. Founded on 4 July 1944. It is the largest and most well-known development bank in the world. The International Monetary Fund building is located right next to the World Bank. The IMF was founded  on 27 December 1945. Also located in Washington is the Federal Reserve Board.

Astrogeographic position of the WBG, IMF & Federal Reserve Board Board buildings for morphogenetic field level 1 which describes the supraregional international topics of the institutions: one coordinate lies at 6° Cancer the 2nd at 27° Leo and in exact square to the European Central Bank. This square aspect though an aspect of tension is typical for the antagonisms but also the relatedness of internationally organized institutions. See the grand crosses in the EU and UNASUR. The Central banks of Russia and China have a similar square between them (see below)

Astrogeographical position of the World Bank Group and International Monetary Fund buildings in Washington for morphogenetic field level 3 which describes the atmosphere and topic of the area where the building is located together with the White House: the sites are located in practical air sign Gemini sign of contacts, communication, interfaces, indformation, spying, connecting people and road crossings. The 2nd coordinate lies in aristocratic air sign Libra sign of openness, harmony, balance, justice, relationship, consulations.

Bank of China Headquarters in Beijing

Astrogeographic position of the Bank of China headquarters in Beijing for morphogenetic field level 1 which describes the supraregional international topics of the institution: one coordinate is located at 2° in fire sign Leo and at 17°Sagittarius.

Astrogeographical position of the Bank of China building in beijing for morphogenetic field level 4 which describes the atmosphere and energetical topics of the building itself : one coordinate stretches from dynamic fire sign Sagittarius sign of style, design, luxury, success, travelling, thinking, growth into solid, strict, hierarchical, exclusive earth sign Capricorn sign of control, rules and regulations, government and the ruling classes. 2nd coordinate is in emotional water sign Cancer sign of feeling at home.  The combination of Sagittarius with Cancer stands for the round architectural elements and the dome.

Astrogeographic position of the Central Bank of Russia headquarters in Moscow for morphogenetic field level 1 which describes the supraregional international topics of the institution: one coordinate is located at 2°Taurus the 2nd at 12°Cancer. The 2°Taurus coordinate lies in exact square to the astrogeographical position of the Bank of China in Beijing.