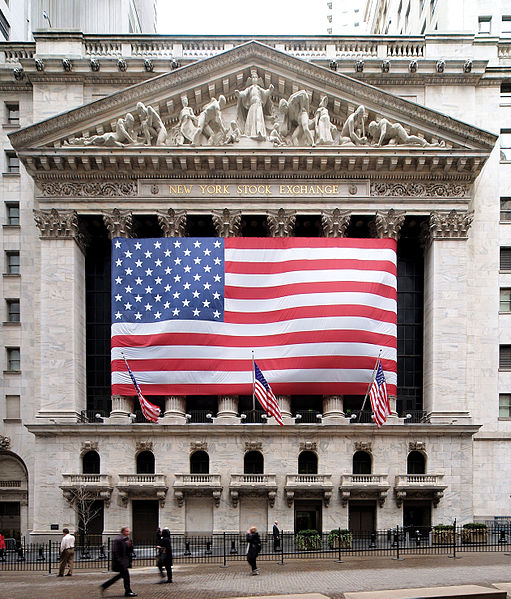 The New York Stock Exchange Building on 11 Wall Street is the home of the world`s largest and most important stock exchange.

Morphogenetic field level 4 (exact adress) – the energetical situation of the building itself:
The midpoint of the building is located right in between service orientated air sign Libra sign of openness, relationship, immediate reaction onto partners, stages and the highly alert, defensive water sign Scorpio the sign of hierarchy, trauma, illusion and alchemy. The 2nd coordinate lies in highly imaginative, spiritual water sign Pisces the sign of the unconscious and unknown, dreaming, fairy-tales, legends and illusions, uncontrollable situations, intuition, flowing with the tides, temples, manipulation and corruption.
The combination of the sensory, mental sign Libra with highly intuitive Pisces can be understood to describe the special forms of perception and communication which require a quick and intuitive flow of analysis and recognition of atmospheres and tendencies as well as the readiness for intuitive exchange.

Morphogenetic field level 1 (region) – the international impact and resonating degrees
For the international level of resonance the Wall Street Stock Exchange building is located at 12° of the water sign Cancer and 13° of the fire sign Leo describing how the Manhattan financial district is related to the national and global economy and politics. These astrogeographical  degrees are is recommendable for the use in stock market and financial astrology. A really dramatic documentation for the relevance and precision of these resonating degrees can be found in the astrological chart for the Wall Street Crash on October, 29 1929:

Chiron the astrological ruler of Virgo the aspect of reason, strategical planning and health was occupying the square position to New Yorks financial district at 12° of the earth sign Taurus the major indicator for money, trade, agriculture and market places in exact conjunction with the North Node (Rahu) of the Moon. The conjunction of Mars and the Sun with the half-sum at 11° Scorpio were in opposition to Chiron transiting the square position to Wall Street at the same time.

Venus which as the ruler of Taurus is the planet of money and wealth was transiting 12° Libra in a third major square position with Wall Street`s coordinate at 12° Cancer. Venus because situated exactly on the half-sum between Mercury and Moon in Libra brought in an extremely heavy line of aspects of tension.

The Start of the New York Stock Exchange in 1792  fell into a period when Uranus had been transiting the astrogeographical position of New York for about a year indicating a period of extreme and rapid changes. At 10:10 the time suggested on the Astrodienst page the ascendant at 11°Leo was exactly on the astrogeographical coordinate at 11° Leo emphasizing the direct resonance between the Stock Exchange and the future development of the Manhatten area as the heart of New York.

The Sun on the degree of wealth at 27° Taurus was on the most profitable and promising degree for highest possible profits. The position of Venus at 19° Taurus in exact square to Saturn at 19°Aquarius stood for the motto and intention make profit regardless of all aspects of lastingness, morality, human rights, social values and higher ideals of the American Revolution. Saturn appeared to have been at least to a larger extent eclipsed by that Venus position and its support through the mirrorpoint conjunction of Mercury with Saturn from 11°Taurus.