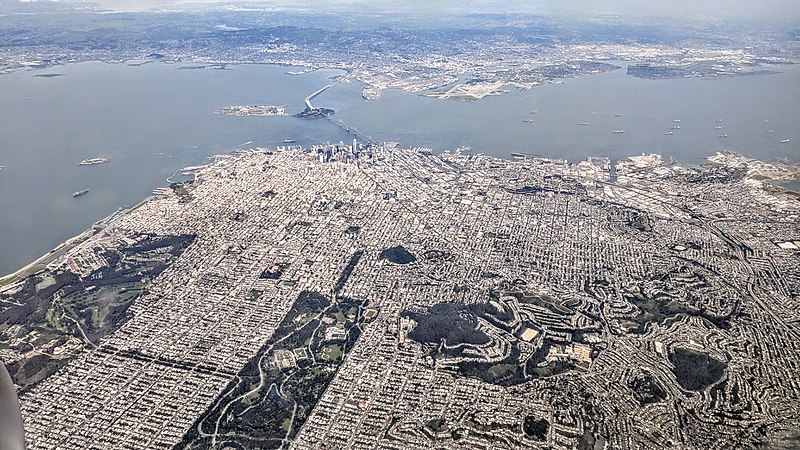 Related articles: The San Francisco Earthquakes in astrogeography, Virgo as the sign of laundries & self-protective adaptation, A rupture of the major faultlines on the US West Coast. Astrogeographical resonance degrees for the 50 US State Capitals.

San Francisco has played an important role as the legendary capital of the Hippie movement. Therefore astrologers may tend to consider the signs Pisces (drugs), Aquarius (liberation), Libra (openness and peace), Gemini (bringing opposites together), Leo (sexuality), Scorpio (addiction), Sagittarius (playgrounds) or others to be its astrological indicators. And that may be plausible and useful in one or the other way. On the other hand it is only natural that such contemplation on potentially useful astrological indicators for places and other local systems is limited to subjective speculation. Therefore my approach to critical thinking suggests evaluation of systemic mapping of lands in order to understand the relationship of places wo each other

My systemic astrogeographical studies of morphogenetic field structures of places are not to be judged by mere associations, imagination or accidental experience from chart interpretation.

In the same way as the zodiac has been created to measure the sun´s path in the sky through a model consisting of equally large zones in the fixed and unchangeable order of the 12 astrological principles, the same structure can be applied to our planet`s surface. I want to recommend not to forget your expectations about the signs but to put them aside in a safe place where you can recall them at any time in order to get to a deeper understanding of a systemic evaluation of their holistic meaning.

So I ll try to explain the results of my calculations:

San Francisco and the divide between morphogenetic fields

Astrogeographical position of San Francisco for morphogenetic field level 1 that describes the continental, global and international resonance topics of the city: San Francisco has one coordinate at 22°-23° in Virgo and the 2nd coordinate at 0°Capricorn. Forevaluation of the exact planetary transits during the 1906 and 1989 earthquakes see my article San Francisco Earthquakes.

The foundation of San Francisco on June 29, 1776 coincided with the transit of Neptune over 22°Virgo exactly conjunct and Venus at 26°Gemini square the 22°/23°Virgo resonance coordinate of San Francisco. The mirror-point conjunction of Venus with Jupiter (constellation of highest profitability) at 4°Cancer with its half sum at 0°Cancer occupied the exact opposition to the 0°Capricorn resonance coordinate of the City.

Neptune conjunct one of the resonance coordinates of astrogeographical positions (S.F – 22°VI-0°CAP) of a city during foreign annexation of the land stands for a situation of reconnection of the local morphic field with the the information of issues of the supraregional, global, cosmic holistic morphic field. Imagine the insecurity caused for the local population during that time. Their rule over the area and even the tribes were wiped out.

Venus as an indicator of occupation of territory for profits in Gemini and square to the town area stands for the invasion of the sphere of interest of a movable and technologically superior (Gemini) group. Jupiter (Zeus) as indicator of victory and expansion was conjunct the 5°-6° Cancer resonance coordinate of Washington.

Astrogeographical positions of the North half of the San Francisco peninsula for morphogenetic field level 2 (city) which describe the energetical topics of the town area itself: the astrogeographical latitude here is in solid earth sign Capricorn the sign of mountains, rocks and stone formations and the main indicator for places of higher altitude than their surrounding areas. This puts emphasis on the fact that the peninsula is a higher ground than the valleys around it which are under the sea level here. The field in Capricorn begins at the very end of the San Francisco end of Golden Gate Bridge so that Sausalito on its northern end is located in Sagittarius and San Francisco to the south is in Capricorn.

The coordinate for the astrogeographical longitude of the whole of the peninsula falls in dynamic fire sign Aries in such a way that the western coastline marks the divide between water sign Pisces (Pacific Ocean) the sign of the ocean and fire sign Aries (San Francisco peninsula) and and the beginning of Aries.

Energetically the divide between Pisces and Aries on any size level of morphogenetic fields marks the most important separation line between morphogenetic fields. It separates not only two signs but two full complete sequences of zodiac signs (complete zodiacs) from each other. In this case the position of the coastline is in between two zodiacs for the field level 2, which is the level of cities. Pisces is the last sign of a zodiac sequence (morphogenetic field) that comes in from the Pacific Ocean here and Aries is the first sign of a zodiac sequence (morphogenetic field) that stretches from the west coast of San Francisco about as far as to the city of Mariposa (CA) in the east of Northern California.

The combination of Aries the sign of warfare with Capricorn the sign of administration and government control may be seen to describe the strategical importance of San Francisco for the conquest (Aries) and control (Capricorn) of California. So the correspondence of the morphogenetic field of the San Francisco peninsula with Capricorn and Aries has several major implications:

Aries: the pacific coastline of San Francisco is an important strategical stronghold for the conquest and colonization of Alta California and also for the relationship between California and the Pacific Ocean. Aries marks the beginning of a morphic field that

Capricorn: the peninsula is a landmass that sticks out from the Pacific Ocean because the ground here is more solid here than in the surrounding areas. Capricorn indicates that the place is of high strategical importance for the control over the passage into the San Francisco Bay and over the most important seaport on the west coast of North America. Capricorn also stands for the reference of the town name to an already existing older culture and for the purpose of installing that culture here in order to gain and secure control over the region. The name of San Francisco was applied to put the town area under the spell of the Spanish state cult.

An example for Field Level 4: The road crossing of Haight and Ashbury Street in Aries with Aquarius

Astrogeographical position of the haight-Ashbury intersection for morphogenetic field level 4 which describes the energetical topics and atmosphere of the road crossing itself: the famous intersection of Haight and Ashbury streets has one coordinate in the last degrees of the creative, rebellious and individualistic air sign Aquarius the sign of the sky, heaven, paradise, self-finding, escaping, inspiration and creativity. The 2nd coordinate is ion the divide between dynamic fire sign Aries the sign of action, speed, fighting, mobilization, sports and solid, fixed earth sign Taurus the sign of market places, town centers, food, growing roots and grounding.

If this sign combination is taken as a symptomatic, characteristic constellation for the Hippie movement it would mean something like: bringing self-finding, self–liberation, revolution, mutation (Aquarius) and its active manifestation in practical, material reality (Aries/Taurus) together.