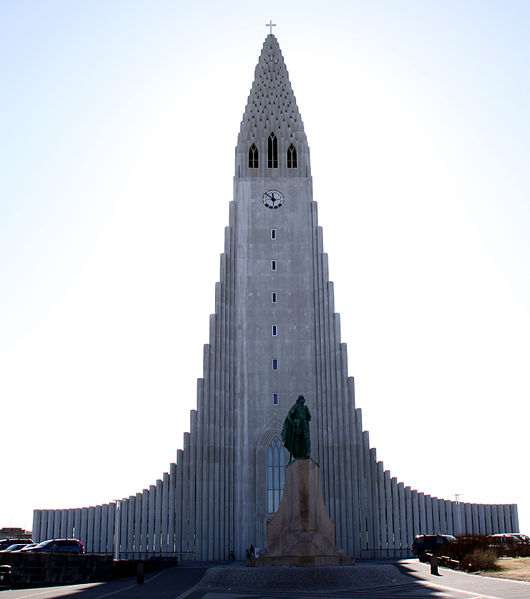 Aries and Aquarius – Hallgríms Church in Reykjavík. Astrology and Architecture: the astrogeographical resonance coordinates of the “rocket church”.

Related articles: An Aquarius Tower for the Olympic Flame, Characteristic features of Aries architecture, Aries as the Sign of Unicellular Structures, Dublin Spire, Ulvetanna, Aries and Aquarius – The Sidney Opera House, Distortion as an element of design in Aquarius, Lying or Flying – The Controversy between Taurus and Aquarius at the Leaning Tower in Pisa.

Hallgrímskirkja is a lutheran church in Reykjavik, Iceland built from 1945 until 1986 and designed by architect Guðjón Samúelsson. It is named after the icelandic poet and clergyman Hallgrímur Pétursson (1614-1674). Its tower is 74,5 m high and due to its position on a hill
it stands out over the town of Reykjavik.

Aries with Aquarius as the constellation of rockets

The rocket-like shape of the building is a really intense example for the astrogeographical combination of creative, innovative air sign Aquarius sign of the sky, heaven, flying and the urge and attempt to reach out for the sky with dynamic male fire sign Aries the sign of ignition, erection and phallic forms. This constellation is valid for astrogeographical radius/field level 4 here, which describes the atmosphere, function and design of the building itself.
Both astrogeographical aspects of the place, Aries as well as Aquarius put an emphasis on the tower. Aries through its relatedness to phallic forms and Aquarius as the sign of the reconnection of the earth with the sky.

The decision for the concept designed by Samúelsson was made in 1937, a time when rocket launchers had already been designed, but the technology for their construction rockets not developed yet.
The association of a rocket launcher for a church suggests the potential of religion to create the possibility for a “physical” ascension to heaven or into the cosmos.

The physical aspect and speed to make this possible is reflected astrologically by the sign of Aries, which in case of a rocket stands for the ignition and fuel combustion. Aquarius the sign of the sky and of heaven reflects the topic of reconnection with the full extent of the true potentials of physical beings. The topic of reconnection with the cosmos and sky is represented by the fact that the tower is pointing at the sky, by its height and by the way it is sharpening while ascending. Bringing a new element into the history of the architecture of churches may be seen as a stylistic incongruity here, but is also an element of reconnection by reminding people of the full extent of possible choices.

The shape of the building appears to  concentrate all energy at the tip and spine of the church tower inside the center of the rocket. The one-dimensionality created by that is a clear trait of design related to Aries. Compare: Aries as the Sign of Unicellular Structures: Astrodome & Co., Characteristic features of Aries.

The constellation of Aries with Aquarius, like no other stands for the momentum of the change (mutation) of form. The mutation of the common and traditional designs of church buildings appears as the main aim of it`s architecture.

The organ pipe like structures attached to the tower and descending on the right and left side make the building look like a super-large pipe organ. These structures are highly characteristic for the overall appearance of the building, But they do not serve its stability or any practical function bur rather seem to be purely ornamental – especially considering the congruence of the two wings.
Another allusion created by the organ pipes design is the similarity to the basalt lava wand formations that are so typical for Iceland. Compare: Basaltstäbe “Die Wand” bei Gerðuberg, Island. The allusion to the basalt wands is a grounding element for a church building in the volcano island Iceland`s capital city.

For the understanding and evaluation of the design and style the organ pipe basalt wands are of paramount importance, because the range of typical elements of the construction of church towers is extended here by one element that has the potential for various kinds of associations including caricature. Among other things, the tower gets an orchestration by the organ pipes or acts like a rocket launcher. I have another association here: they resemble also the baleen found in the of baleen whales.

The classical forms of church towers are put in question by this element of the building and the tower is sort of woven into the landscape. What does that mean for the flow of energies within the building and also the effect of the building as a punctuation of the morphogenetical field of the Reykjavik area. The effect here is that the energies concentrated on the spine and tip of the central church tower are energetically spread along the organ pipes with the effect that the grounding of the rocket in the center is spread and thus stabilized. This shape of the tower may be seen to support another a main function of the building indicated by its position in Aquarius: it provides an image and imaginable connection between earth and sky.

Guðjón Samúelsson was born on 16 April 1887 with the Sun conjunct Mars in Aries and the Moon in Aquarius.
This coincidence of his birth chart with the astrogeographical coordinates of the site is remarkably intense. No wonder that this was Guðjón`s most famous construction project.

The Mahabodhi Temple Tower in Aries and the difference Libra makes

Another example for a central tower located in Aries is the Mahabodhi Temple near the site of Buddha`s enlightenment. The Mahabodhi (literally: Temple of Awakening) Temple  in Bodh Gaya was first constructed in the 3rd century BC. The current structure is as old as the 5th century AD. The “awakening” relates to the function of fire sign Aries as to stimulate mobilization and ignite the motor.

The exact position (field level 4) of the temple lies in the subdivisions of  Aries with Libra of a larger surrounding area  (field level 3) which has both coordinates in highly relaxed, mystic, spiritual water sign Pisces the sign of the spiritual plane.

The temple consists of a central tower with an ornamentation that resembles a typical Hindu temple tower, but with a conical, stupa-like sharp tip. The tower is placed on a square platform  with 4 equally tall small towers at the corners. The central position of the tower is a clearest element of design often found in Aries. The attempt to ground the tower by creating a  balance between the central main tower and the surroundings area by the 4 corners towers and the symmetrical design and decoration is symptomatic of the presence of Libra.  Compare:  Libra as the sign of symmetry.

The difference to Halgrimskirkja lies in the decoration and the “relativization” of the main tower by the corner towers. These elements take away some of the acuteness and single-dimensionality of the image created by the design of Halgrimskirkja.