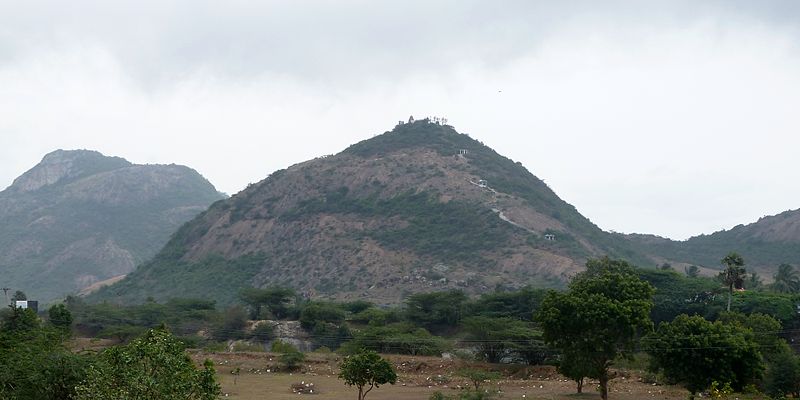 Related articles: The Sites of the 12 Jyotirlinga, The Shakti Peetha shrines in astrogeography, The Hindu Gods Vishnu and Narayana in astrogeography, Shiva in two water signs, Pashupatinath Temple in Kathmandu, The Rock Fortress of Sigiriya, The source of the river Ganges in Cancer-Scorpio, A Kali Temple in Libra the Sign of the Angels, Meenakshi Aman Temple.

Shree Dharmalingeshwar Malai Hill Temple is located south of Coimbatore in western Tamil Nadu, South India. Shiva is worshipped here in a self-manifested (not human made made) form called “Swayambu”.
The position of the sanctum sanctorum (shrine) with the “self-manifested” idol between Cancer and Leo the astrological simile of the birth moment is a fascinating image of a place of worship dedicated to all topics of birth and emotional self- expression.

Another important example of a self-manifested lingam shrine is the ice-lingam known as the “Amarnath Jyotir Lingam” in Kashmir located in Cancer with Aries.

The temple shrine itself is located right on the divide between emotional water sign Cancer the sign of the moon, motherhood, fertility and emotional identity, individuality and authenticity and a main indicator for Shiva and highly magnetic royal fire sign Leo the sign of the sun, light, heart, power stations, self-expression, birth and sexuality and a major astrological resonator of Vishnu.

The location of temple sites between Cancer and Leo describes such places as sites where lunar and solar qualities join and assimilate. As the sun and the moon are the strongest gravitational and energetical factors in astrology places where Cancer and Leo coincide are sites of a particularly strong energetical impact.

At the same time combinations of Cancer as the sign of the uterus, conception, motherhood, milk, pregnancy, prenatal-life combines with Leo as the sign of self-centered royalty and rights of individual self-expression combines a the central aspects of female and male gender and sexuality.

This also suggests that the Dharmalingeshwar temple is to be examined as a site that supports and stimulates the manifestation of the energetical impact of the assimilation of the male and female aspects of the worshiped god in the shrine and also in its visitors. Not in a merely transcendental way like in spiritual signs Aquarius and Pisces – but rather in the way of the manifestation of an energetical power plant where the female aspect of the god – the so called “shakti” is combined with its male aspect.

The 2nd coordinate of the shrine is in solid, traditionalist, conservative, strict earth sign Capricorn the sign of mountains, rocks, history, austerity, impediments, regulation, state cult and an important resonator of prominent positions. Capricorn resonates with the location of the site on top of a hill making it a place that is comparatively difficult to access. Capricorn can be expected as an aspect that serves the stability of the energetical situation at the shrine and an impact that delivers information of abstract non-subjective matters and priorities. Capricorn could also be found to represent the astrological resonator of the topics of the formal abstract laws, values and assumptions of “dharma” which reflect the knowledge of the regulative conditions at the basis of lastingness and solidity of human culture, existence, survival and morality worshiped here in the form of the Dharma-Linga.

Both astrological resonance coordinates of the whole of the hill on which the temple is located and its surrounding area are located in emotional water sign Cancer which together with Scorpio (Ganges source & Varanasi constelletion) is the most important astrogeographical resonator of places dedicated to the worship of Shiva and his female form Shakti.

The whole of the hill on which the temple is located appears to be a place of resonance of the topics of fertility, emotional self-centering, karmic individuality and contact with ancestors or ancestor lines for the areas around the City of Coimbatore.

Two of the 12 important “Jyotir Lingam Shrines” are located in a double Cancer location too: The mountain temples of Kedarnath and the Omkareshwar temple site.

Cancer seems to be also the most important astrogeographical factor of the famous Shakti Peetha shrines – sites particularly dedicated to healing. For more examples of the important role of the sign of Cancer in Hindu religious sites and Indian culture as such see my articles on the Hindu Gods Vishnu and Narayana and  “The Statue of Indian Unity”.