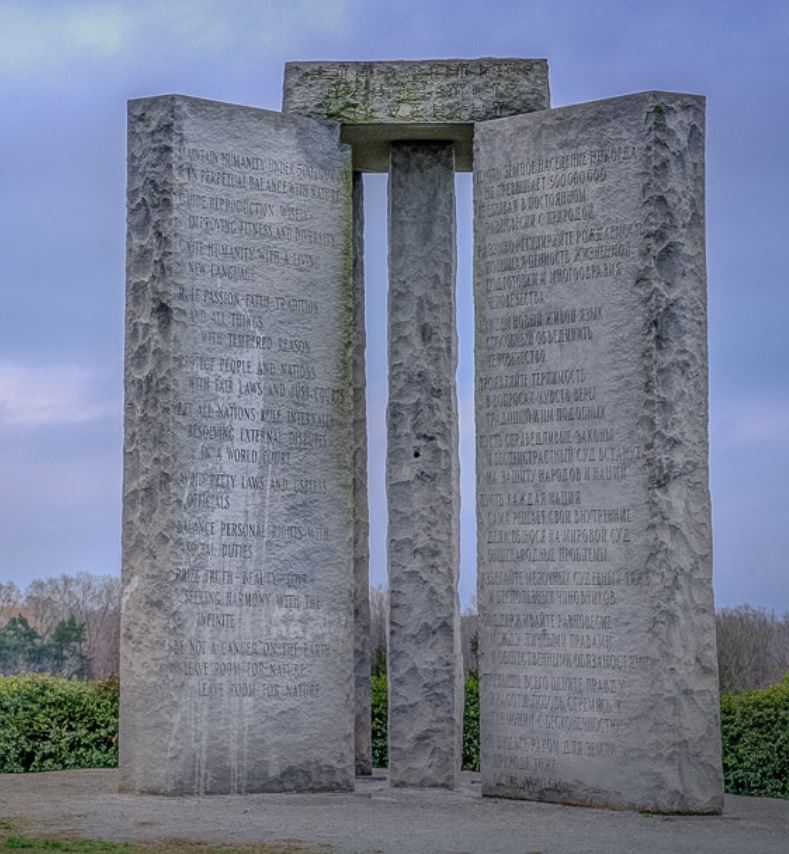 A concept for an age of “reason”: the Georgia Guidestones in Virgo the sign of conservation, mummies, health, storing goods, protection of nature, plants and life……

Related articles: The Valley of the Kings in Virgo, Virgo and Gemini – The Greenpeace Headquarters in Amsterdam, Jupiter in Virgo and the Ocean Cleanup project, WWF dutch headquarters, On the astrology of Hobbitland, The Tree of Life in astrogeography, The Museum of Witchcraft & Magic in Boscastle,  Virgo & Gemini: the role of the two Mercury signs at the Witches` Market in La Paz

The Georgia Guidestones are a granite monument unveiled one day after the spring equinox on 22 March 1980 in Elbert County, Georgia. A set of 10 guidelines is inscribed on the structure in eight modern languages and a shorter message at the top of the structure in four ancient language scripts. Not that the monument is of any importance

Astrogeographical position of the Georgia Guidestones for morphogenetic field level 4 which describes the atmosphere and energetical topics of the monument itself: the site is locatd in self-protective earth sign Virgo the sign of reason, health, doctors, medicaal treatment, healing, herbal medecine, vegetarian diet, yoga culture, gardening, ecology, protection of nature, conservation, mummies, harvest, storing food and strategical plans for financial security. Virgo resonates with the idea of providing a strict and provocative wording for a new version of the ten commandments based on the ideal of ecology here. The 2nd coordinate lies in emotional water sign Cancer the sign of emotional individuality, fertility, conception, pregnancy, the vagina and uterus, feeling at home. and of emotional authenticity as the basis for emotional authenticity in modernity.

Wording of the 10 GG commandments

The wording of the guidelines appears to me relatively subjective, imprecise and with a lack of deeper reflection of the abstract consequences and meaning of the commandments. Not to talk about the standards of pihilosophical discourse and spiritual perspectives. That simple mindedness seems to make the monument a merely technical installation in the first place. And intellectually speaking it represents a relatively dumb attempt to present ideas for a survival kit with no profound investigation and ignorant of the more holistic cultural inheritance of human knowledge. I suggest the wording should be read as a programmatic, poster-like monument for an attempt for educational slogans at the beginning of the era of the awakening of environmental consciousness in the late seventies and early nineties of the last century..

These are the inscripted 10 commandments:

The first commandment has been criticized as a call for a genocide – and for good reasons. The 2nd coomandment seems a call for genetical manipulation or at least breeding of genetic material. The third could seem like an attempt related to the Nazi`s “Gleichschaltung” but may still be interpreted positively. Rule passion? – the fourth seems like a commandment from a George Orwell novel. The rest are relatively vague. The one that really matters for good – at least from my point of view – would be the 10th: Leave Room for Nature.

The midday chart for the day of the opening of the Georgia Guidestones has Saturn the ruler of laws, rules and regulations exactly conjunct the IC in Virgo and thus on the astrogeographical coordinate of the piece of land where the monument was installed. Saturn was in exact square to the Moon in Gemini the sign of signposts, technology, information, language, teching and education indicating a controversy with the topics of uncontrolled expansion of the exploitation of technological innovation.

Jupiter the planet of healing, understanding, aiming, philosophy and growth was on a degree known for reflexes of self-limitation at 2° in Virgo indicating the purpose of adjusting to necessities.

Mars the planet of action, warfare and fighting was conjunct the North Node both on the so-called degrees of royalty and in exact resonance with the 27° Leo astrogeographical position of Washington showing the attempt to instruct US governments. Behind Mars stood the Sun near its spring equinox position indicating the intention to make a new start. But the Mars` position fell in a square to a Uranus in the last quarter of house 5 the house of self esteem in a constellation of over estimation of one´s own abilities and a tendency for a self-centered maniac and illusionary approach rather than an attempt to really confront and work on solving the problems of mankind.

The resonance with the Green Party and ecological movement

The 10th commandment of the Georgia Guidestones most clearly relates to the topic of environmental awareness as part of the zeitgeist of the lates seventies and early eighties. An important political step in that era was the foundation process of the german Green Party the first of this name worldwide. It was started on 13 July 1978 (source) and led to the official foundation on 13 January 1980.

The foundation process of the Green Party shows a clear resonance with Virgo`s role as the sign of protection of nature and direct resonance with the Virgo planets in the Georgia Guidestones project.