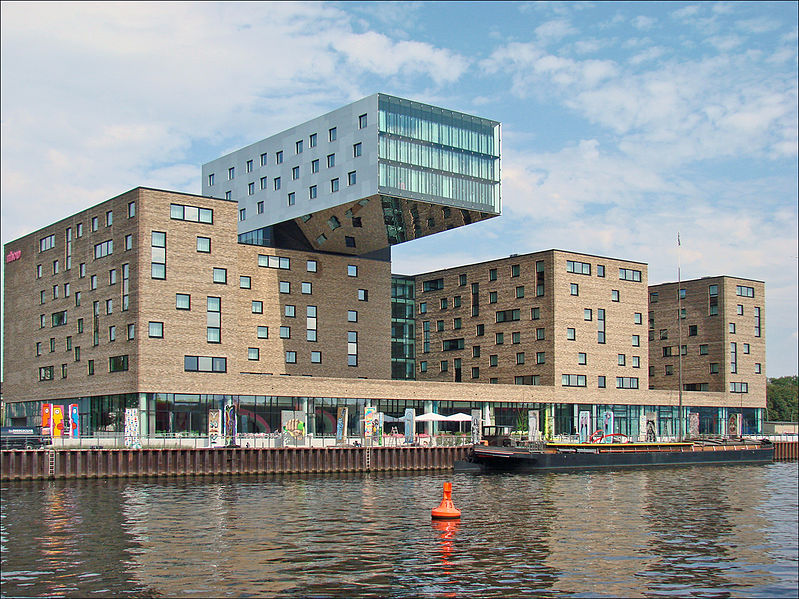 NHhow Music and Lifestyle Hotel in Berlin in astrology: How to deal with the tension that arises from the combination of Aquarius with Capricorn in astrology, architecture and art.

NHhow Music and Lifestyle Hotel in Berlin in astrology

The tension between stability orientated earth sign Capricorn and the innovative appeal of air sign Aquarius reflects major issues of indivdualism and individualization, self-responsibility, freedom and the fuller potentials for self-expression, traditional social class system, rules and regulations vs. freestyle and formality vs. creativity

Places located in the combination of Aquarius with Capricorn are perfect for experiencing the antagonism between the independent/alternative innovative creativity orientated and classically accepted branches of culture, art and individual self-expression. Saturn/Uranus aspects is where try to bring antagonstic aspects together sth. cant be done without suppressing the originality of both the single elements.

The concept of the NHhow music and lifestyle hotel in Berlin is centered around music. You find 2 professional recording studios here. Every room is equipped to record your singing in the bath at any moment.
The location of the hotel on the East-Berlin bank of Spree River and a site that once hosted the automatic firing systems of the Berlin wall but facing the West-Berlin side right across the river is symbolic of the Capricorn-Aquarius situation in between two worlds.

Located only a 10 minutes walk from Berlin`s legendary club monster “Berghain” (located in Sagittarius with Leo) the NHhow music hotel lies in between the home zone of the traditional West-Berlin political activist scene in Kreuzberg and the freestyle East-Berlin area of Friedrichshain. It may be argued that the name of the “Berghain Club” as a bridge between the West-Berlin and East-Berlin cultural zones is conceptual rather than realistic. And to be realistic not only are the club and the hotel located in Friedrichshain not in Kreuzberg – but also would it be quite impossible to imagine the Kreuzberg political scene to allow that club on the Kreuzberg side of the river.

The NHhow music and lifestyle hotel in Berlin was designed by architect Sergei Tchoban born 9 Oct 1962 with the sun in the center of service orientated air sign Libra the sign of bridges, balance, decoration, attempts to harmonize antagonisms instead of allowing their individual characteristics and of naive painting.The sign of Libra is the classical astrological field for all attempts to mediate, pacify and overwrite the antagonism of the Saturn-Uranus aspect. It is the classical situation in between these two archetypal structural elements.

The moon and Saturn in Sergei Tchoban are located in air sign Aquarius making him a protester and/or escapist from situations of being stuck between Saturn`s loyalism to obligations to the ruling classes and Uranus` ideal to start creating paradise the way we want it. But the question is: why chose a constructions that wants to stick to the past (Capricorn) when we declare preparing for the future (Aquarius)

In this case the architect seems to have decided for an arrangement of rectangular cubic buildings (Capricorn as the sign of reduction and of bones) and with an earthy coloured brick facade as the main elements of the building.

But just in order to confront that design with a stylistic incongruity through the silvery surface of an additional building that he simply placed on top of the building and in such a way that it stands out freely in the open air. All these aspects clearly resonate with the astrogeographic position in Aquarius.

Astrogeographic position for morphogenetic fioeld level 4 which describes the atmosphere and energetical topics of the building itself:
one coordinate lies in creative, innovative air sign Aquarius sign of the sky, heaven, paradise, flying, self-finding and reaching for the sky aka the limit of ones fuller potentials. Aquarius clearly relates to the shining surface of the silvery facade, the stylistic incongruity, the part of the building that stands out over the other parts “seemingly floating over the Spree river” and also to the ideal of placing a building on top of other buildings .
The 2nd coordinate is located in solid, conservative, hierarchical earth sign Capricorn sign of tradition, stabilizing elements and control and the indicator for the cubic forms here. Capricorn stands for the exclusiveness of a luxury category and upper class hotel.

The irregular order of the windows that breaks with the habitual patterns is also an element of design that seems an element where the rebellious intention of Aquarius to contradict the traditional reflexes of Capricorn.