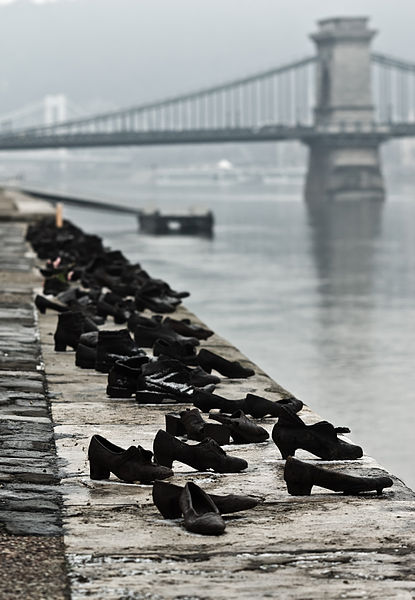 Related articles: The Warsaw Ghetto in astrogeography, Partisan Memorial at Yad Vashem in Scorpio with Aries, The Knotted Gun Sculpture in Libra with Virgo, The Astrogeography of Jerusalem and Future Transits of the outer planets,

Shoes on the Bank of Danube River in Budapest

The idea for the Holocaust Memorial entitled “Shoes on the Bank of Danube River” was conceived by film director Can Togay and the sculpture was created by Gyula Pauer. The composition gives remembrance to the 3,500 people, 800 of them Jews, who were shot into the Danube during the time of the Arrow Cross terror. The sculptor created sixty pairs of period-appropriate shoes out of iron. The shoes are attached to the stone embankment, and behind them lies a 40 meter long, 70 cm high stone bench. The installation was erected on 16 April 2005. with the Sun. Mercury and North Node in Aries and Jupiter in Libra. Jupiter in Libra the sign of victims and on the site of the installation stood for a victory for the victims, justice and for a possible pacifying effect of the sculpture on the site, the overall morphogenetic field of the Hungarian capital and for the spirit of the victims.

Astrogeographic position for morphogenetic field level 4 which describes the atmosphere of the site itself: the sculpture is located in service orientated air sign Libra the sign of harmony, balance, justice, beauty, peace, victims, openness, angels. decoration, relationship, pairs and stages. Libra stands for the heart-felt intensity and beauty of allowing the display of the full impact of the suffering spreaded by fascism. The sculpture thus opens up the gates allowing the presence of the angels and spirits of the suffering and of remembering the vicitms of fascism.

The 2nd coordinate of the sculpture lies in dynamic male fire sign Aries sign of action, warfare, fighting, aggression and the most important astrological resonator for german culture and also for central issues of the fascist mentality of aggression in general. The strong relationship between Aries and fascism is getting clearer today since we are experiencing the Uranus return from the era of the rising of European fascism (1927-1934) again today since 2011.

The opposition of the two astrological coordinates reflects the controvesry between Libra the sign of the victims and Aries as the sign of aggression.