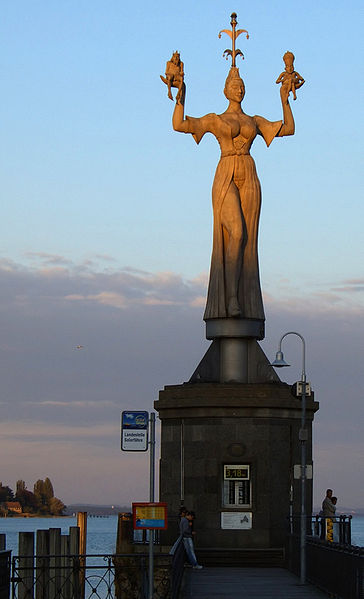 Related articles: Scorpio as the sign of sculpting, Martin Luther`s Constellations at Wittenberg, Wartburg and Worms

The Imperia Statue is a ten metre tall rotating sculpture at the end of the pier in the harbor of Constance, Germany that was clandestinely erected by sculptor Peter Lenk (born 6 June 1947) in 1998 to commemorate the infamous Council of Constance held here between 5 November 1414 and 22 April 1418. The courtisane Imperia stands for the 1000 prostitutes brought to town for the council members, cardinals & pope. The sculpture present sitting statues of Pope Martin V and of Emperor Sigismund holding them up with her hands.

Astrogeographic position for morphogenetic field level 4 which describes the atmosphere and topic of the sculpture itself: located in earth sign Virgo sign of reason, adaptation, existential fears, virginity, celibacy, monk-hood, slavery, dependence, optimal use of resources and strategical planning.  Virgo is a natural resonator with all topics related to the celibacy vow of catholic priests. But as the sign of slavery and dependence it also resonates with the suffering that derived from of the prostitution of slaves.  Therefore the position of the Imperia statue in Virgo resonates with the extreme corruption of the catholic church at the times when the pope´s courts in Rome and also at the Council of Constance were equipped with large brothels.

The second coordinate lies in creative, innovative spiritual air sign Aquarius the sign of the sky, heaven, paradise, abstraction, self-finding,  reconnection with the fuller potentials of human existence,  rebellion, revolution and inspiration. An important aspect of Aquarius is reflected by the provocative elements in the statue. The site at the end of the pier on the edge of another world is also an element typical for Aquarius in its role as the sign of connection with outer space or other worlds.