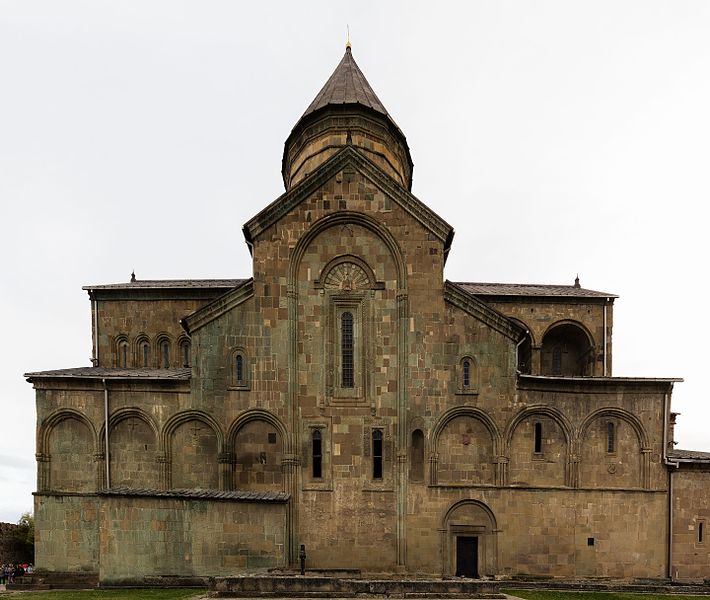 Svetitskhoveli Cathedral and monastery literally the “Cathedral of the Living Pillar” is an Eastern Orthodox church in the historical town of Mtskheta to the northweat of Tiblisi the capital of Georgia. It is believed to have been the first church in the country. Georgia adopted the christian faith as state religion as early as 337 A.D.. St. Nino (orthodox feast: 14 Jan) is said to have personally chosen the confluence of the Mtkvari (Kura) and Aragvirivers as the place of the first Georgian Church. The present structure supposedly built on a 4th century church was completed in 1029. The church is celebrated as the burial site of  Christ‘s mantle (although it shares that fame with a number of other churches).

Astrogeographical position for morphogenetic field level 4 (exact adress) which describes the energetical topics and atmosphere of the cathedral building itself: one coordinate is located in mystic spiritual water sign Pisces sign of spirituality, dreaming, illusions, legends, the invisible, unconscious, intoxication, music, letting go and the most important astrogeographical factor for the role of temples as places of reconnection with the spiritual plane. Pisces relates to the highest aspects of early christian religion through the christ`s dogma of non-action in the face of violence. But of course is the core factor of the reconnection with spirituality in all religions. Pisces invites mystification making it highly typical for the important role of the cult of relics in medieval christianity. Important examples for that role of Pisces are Cologne Cathedral said to host the shrine that is said to contain the bones of the Three Holy kings (magii, astrologers) which is located in Pisces with Leo, the grave of King Arthur in Glastonbury Abbey located in Pisces – Pisces, the Church of the Nativity in Pisces with Sagittarius and the site of the first Temple in Jerusalem located in Pisces with Taurus.

The 2nd coordinate of the Svetitskoveli Cathedral is located solid, conservative, hierarchical, strict, exclusive earth sign Capricorn sign of stability of government institutions, rules and regulations, control, preservation of tradition, lastingness, state dogma and religion and of official history. The enwalled character of the fortress monastery and fortified church building are due to the important function of the monastery as a site of government administration. Svetitskhoveli was not only the site of the coronation of the Georgian kings but also served as their burial place This aspect is a clear resonance with the position in earth sign Capricorn. Major astrogeographical examples for central temples of state cult in Capricorn are: Karnak Tempel of Amun Re, Tian Tan Temple of Heaven in Beijing. Pashupatinath in Katmandu,

The Christ`s robe relic is said to have been buried underneath a 17th century pillar – the “living pillar” or life giving pillar to which a long line of miracles has been assigned over the centuries.

Inside the cathedral is a copy of the Church of the Holy Sepulchre in Jerusalem:

The cathedral was surrounded by a defensive wall, built of stone and brick during the reign of King Erekle II (Heraclius) in 1787. The top storey was designed for military purposes and has gun emplacements. The wall has eight towers: six of them are cylindrical and two of them are square.

Mithsketa Cathedral together with the small town of Svétitshovéli are located at the confluence of Mtkvari (Kura) and Aragvi rivers.

Astrogeographical position of for morphogenetic field level 3 (surrounding area) which describes the energetical topics and atmosphere of the the whole of the enwalled area of the cathedral, the town of Svétitshovéli and how it is embedded in the larger area: the town is located in the combination  of water sign Cancer and Scorpio, a highly typical and ideal constellation for the confluence of 2 rivers. As the sign of rivers, springs, fertility, pregnancy, motherhood, feeling at home and the natural habitat of crabs Cancer stands for the position near or in the river bed. Scorpio as the sign of transformation, metamorphosis, fusion, amalgamation and alchemy resonates with the momentum of the transformation of single rivers into one larger stream. The site of the magical confluence of the 2 main sources of the Ganges River at Devprayag located in the same astrogeographical combination (Cancer + Scorpio) is a classical example for that.