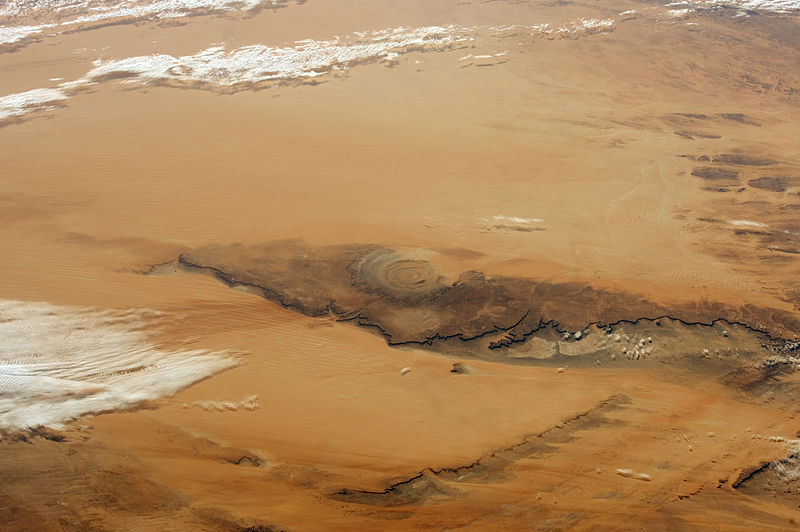 The Richat Structure in Scorpio plus Virgo as resonators at the site of a super-large sinkhole. Astrology, nature and magical places. the astrogeographical position of the Guelb or Richat structure

The so-called “Richat Structure” is the largest of 5 round but slightly elliptical and deeply eroded geologic domes in the deserts of in west-central Mauretania. The Richat structure is 40 kilometers in diameter – with outer ring structures.Initially interpreted as an asteroid impact structure because of its high degree of circularity, the Richat Structure is now regarded by geologists as a highly symmetrical and deeply eroded geologic dome. The central area  of the circled structure is higher (465 m) than the inner  and outer rings (420 m – 390 m). The theory explained in the wiki article assumes that the center of the sinkhole was not necessarily lifted up through a central volcanic pipe but through a large alkaline igneous intrusion underlying the structure.

From the wiki article: “The Carbonatite rocks have been dated as having cooled between 94 and 104 million years ago. A Kimberlite plug and several sills have been found within the northern part of the Richat Structure. The Kimberlite plug has been dated to around 99 million years old. These intrusive igneous rocks are interpreted as indicating the presence of a large alkaline igneous intrusion that currently underlies the Richat Structure and created it by uplifting the overlying rock.”

Astrogeographic position for morphogenetic field level 1 which describes the supraregional topic of the region in relation to the Áfrican continent: the structure is located in the combination of earth sign Virgo sign of reason, mining, health, retreating, protection of nature and plants with solid, fixed water sign Scorpio sign of black holes, caves, water containers, magma chambers.