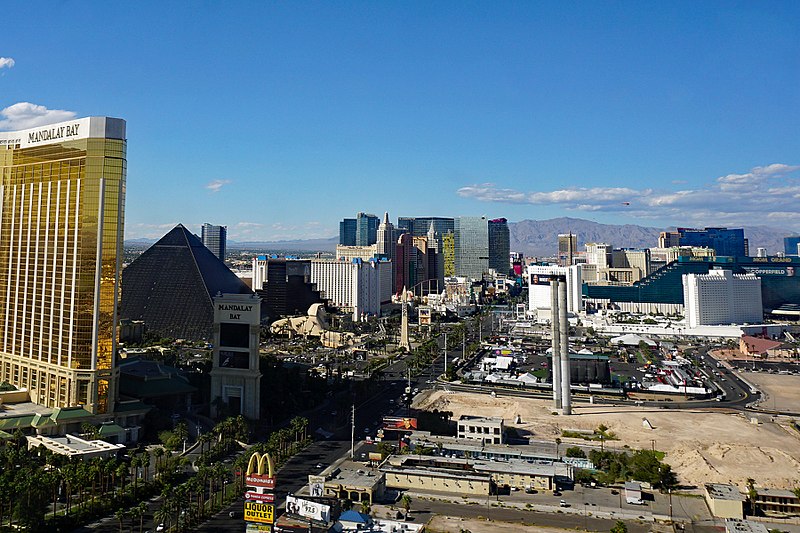 The Las Vegas massacre on October 1, 2017 was a mass shooting aimed at the Route 91 Harvest country music festival on the Las Vegas Strip in Paradise, Nevada. A gunman was identified as Stephen Craig Paddock a 64-year-old of Mesquite, Nevada. He opened fire on the outdoor festival crowd from the 32nd floor of the Mandalay Bay Resort and Casino across Las Vegas Boulevard during the closing performance by singer Jason Aldean.

The Las Vegas Massacre in astrogeography

Astrogeographic position of Paradise, Las Vegas for morphogenetic field level 1 which describes the supra-regional, nationwide and international topics of the shooting and killing: the astrogeographical coordinates are 4°Scorpio and 27°Pisces. The position in highly alert, defensive, solid, fixed water sign Scorpio the sign closed up containers, trauma, pain, strongholds, the robber caste, gang criminals and the underworld resonates with the experience of a “paradise” in the underworld and not the heavenly realms. Pisces the sign of entertainment, music, imagination, dreaming, illusions, legends, the invisible, unconscious, relaxing, holidays, letting go, intoxication and the otherworld relates to Las Vegas as an open space for an imaginary reality. The combination of Scorpio

During the Las Vegas shooting Chiron on 25°58` Pisces was conjunct the 27° Pisces astrogeographic position of  Las Vegas and the conjunction of Lilith at 25°45`Pisces with Saturn at 22°18` in Sagittarius the sign of shooting. Saturn`s position on the descendant the indicator for the stage explains the personal motif of the shooter of aiming at taking over the stage for himself. At the same time the quare of that Saturn – Lilith conjunction to Las Vegas has the quality of a straight attack on the Las Vegas entertainment and lifestyle industries and what the shooter thought that it stands for.

Jupiter the ruler of Sagittarius and indicator for the target itself was in Libra the sign of relationship orientation and in house 5 the house of fun, self-centeredness expression of personal emotions and sexuality but opposite the position of Uranus in Aries the indicating factor for the typical emotions of the current era of the rising of neo-fascism like racism and projection of hate into political motifs.

The shooting was begun with an ascendant of 21°Gemini (Moon-Uranus topics) – a degree known for the topics of intense disgust due to castration, nervousness, paranoia and attempts to get rid of the burdens of unfulfilled emotional desires.

Mercury the ruler of the ascendant was on the cusp of house 5  in a constellation of gambling, playing and attempting to win. The strong Mercury, Sun and Jupiter constellations in house 5 suggest that desire was the main purpose behind the mass shooting. This position being in Libra indicates the desire to be seen and heard and to make others feel what one has to say. The strife for balance of injustices or pains felt or experienced by the shooter like in revenge are to be considered as typical emotions in Libra.

The Las Vegas shooter, 20°Aries and the era of neofascism

Stephen Craig Paddock was born on April 9, 1953 with the Sun between 19° and 20°Aries (exact birth time unknown) in exact conjunction with the Uranus position during the inauguration of Donald Trump as American President (20°46`Aries)) which represented the first Uranus  return since the inauguration of Adolf Hitler as German chancellor (19°55` Aries). Aries is the astrological resonator for the 1st and basic circuit in the human nervous system and its function: capacity of self-defense, fighting, warfare, action, speed, competition, strength, dominance, superiority and factual individuality. Aries stimulates the basic chakras in the nervous system. Central reflexes of Aries are grounding in action, fighting, warfare, mobilization and moving forward. Aries resonates with the level of mono-causality, unicellular organisms and ego shooters.

Conclusion: the position of the sun in Stephen Craig Paddock`s birth chart shows a direct resonance with the basic constellation of the neo-fascist era that began with the Uranus ingress into Aries in 2010/11. The conclusion here is that the triggering of emotional topics of 20° Aries during the US presidential elections and since the Trump inauguration played an important role in the 2017 Las Vegas massacre.

The target selected by the Las Vegas shooter were not Muslims nor Islamists. The choice of Country Music fans at Las Vegas delivers the image of an emotion of disgust directed against middle class white US Americans` culture. This indicates the possibility that US american rural or small town neo-fascism might have been the target. In the light of these considerations the alleged ISIS claim to the authorship of the massacre comes as an attempt of the neo-fascist alliance between ISIS and the Saudi & Trump alliance to distract the public from the actual motifs of the mass murder.

The Sun in Aries was in opposition to the minority status (Saturn-Neptune conjunction) that Stephen Paddock had to face in this incarnation. The recent transits of Uranus over his Sun-Venus conjunction seems to have triggered the decision to carry out the attack.

Neptune in house 10 stood for all topics related to a minority status, depression through loosing or feeling as a looser. All this makes the shooting look like a rebellion directed against the killer`s subjective, personal minority status and experience of loosing.

The birth charts for Nevada

Nevada Territory was founded with a Mercury-Neptune conjunction near 28°Pisces over the astrogeographical position of Las Vegas which today is the state`s biggest city. The conjunction of Mercury with Neptune is the most archetypal of all astrological constellation in regard to corruption, ruthless exploitation of whatever resources, the Mafia and all types of organized crime, fraud, stealing and manipulation. Mercury-Neptune also stands for the entertainment industries. The constellation shows how much Las Vegas represents the fulfillment of the dreams of the era of the foundation of Nevada. The Mars-Pluto conjunction known as the most violent of all planetary aspects on 7° and 8° Taurus the sign of occupation of territory stands for the violent, intensely aggressive and destructive mentality of the settlers and the basis of the psychology of the foundation process of the Nevada Territory.

The day Nevada joined the USA again saw Mercury the planetary indicator of intelligence, playing and gambling at 2°46` conjunct the 4°Scorpio resonance coordinate of Las Vegas.