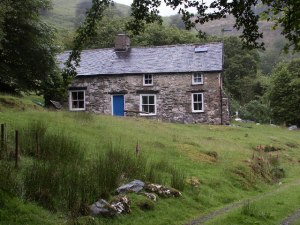 Led Zeppelin`s Stairway to Heaven in Astrology: On the astrogeographical positions of important places related to Led Zeppelin´s magical song.

Jimmy Pages and Robert Plant stated that they first had the inspiration for the song “Stairway to Heaven” during a stay at the mystical Bron-Yr-Aur cottage near Machynlleth in Wales. The place had been a holiday home for Robert Plant`s family during the 1950ies. Bron Yr- Aur is Welsh for “breast (hill) of the gold” or “golden hill”. The text lines “…all that glitters is gold….” and “there walks a lady we all know who shines white light and wants to show how everything still turns to gold” might directly relate to the origin of the song or the feelings reflected in the song at Bron-Yr-Aur cottage.

Astrogeographic position of the Bron-Yr-Aur cottage house for morphogenetic field level 4 which describes the atmosphere and energetical situation of the house itself: the astrogeographical longitude coordinate of the largest part of the estate lies on the last degrees of highly profitable, solid, fixed earth sign Taurus sign of the earth, grounding, growing roots, coming down, food, market places, agriculture and astrologically one of the most profitable positions in the whole zodiac.The east end of the house and estate lies in practical air sign Gemini sign of roads, pathways, bridges, ladders and a plausible indicator for stairways. For a song entitled “Stairway to Heaven” a path leading from the last degrees of earth sign Taurus into air sign Gemini relates the stairway to heaven to the practical path of wealth, financial profits and success. This means that the stairway to heaven we talk about in relation to the site is not the path of to a spiritual heaven or paradise (Aquarius, Pisces) but rather a path to material success and stepping ahead on the ladder of success. The text line.“..it`s just a spring clean for the May Queen…” perfectly resonates with the path from Taurus into Gemini as the Sun moves through Taurus for 20 days during the Month of May while it spends the last 10 days in Gemini. The fact that Gemini is also the sign of US culture and of globalization especially in combination with the text line “….there´s a feeling I get when I look to the West, and my spirit is crying for leaving….” indicates just the same.

In Robert Plants Birth Chart the path from Taurus into Gemini relates to the movement from house 6 the house of work onto the descendant which relates to the moment of entering onto the stage and into house 7 the house of relationship and love and also of becoming visible for other people through appearing on stage. This is also the reason why house 7 represents the house of success for artists and particularly for stage performers.

“Stairway to Heaven” was first published on the album Led Zeppelin IV on 8 Nov 1871.

The astrological chart for the release of the album Led Zeppelin IV is absolutly fascinating in regard to the resonance with the astrogeographical positions of the Bron-Yr-Aur cottage and the Moon position at 4° Cancer in Jimmy Page´s birth chart.

Step 2: Working on the composition and writing of the lyrics at Headley Grange

From the wiki article: “Headley Grange is a former poorhouse in Headley, Hampshire, England. It is best known as a recording and rehearsal place in the 1960s and 1970s for some of the most influential and important english bands such as Led Zeppelin, Bad Company, Fleetwood Mac, Genesis, Peter Frampton, the Pretty Things, Ian Dury and Clover. Parts of Led Zeppelin’s albums Led Zeppelin III, Led Zeppelin IV, Houses of the Holy and Physical Graffiti were composed and/or recorded at Headley Grange. Led Zeppelin vocalist Robert Plant wrote most of the lyrics to Led Zeppelin’s “Stairway to Heaven” there in a single day. The Led Zeppelin song “Black Dog”, which appeared on Led Zeppelin IV, was named after a black Labrador Retriever which was found hanging around Headley Grange during recording…….Peter Gabriel and other Genesis members have acknowledged writing much of the material for their 1974 concept album The Lamb Lies Down On Broadway at the retreat.“

Robert Plant wrote most of the lyrics for the song “Stairway to Heaven” one of the most important songs in the history of Rock Music at the famous Headley Grange studio estate in Hampshire about 60 km southwest of London. In an interview is stated that: “My hand was writing out the words, ‘There’s a lady is sure [sic], all that glitters is gold, and she’s buying a stairway to heaven’. I just sat there and looked at them and almost leapt out of my seat.”  Plant’s own explanation of the lyrics was that it “was some cynical aside about a woman getting everything she wanted all the time without giving back any thought or consideration. The first line begins with that cynical sweep of the hand … and it softened up after that.”.[13]

Astrogeographic position of Headley Grange for morphogenetic field level 4 which describes the atmosphere and energetical situation of the house itself: The astrogeographical longitude coordinate of Headley Grange lies in open-minded, dynamic, easy going fire sign Sagittarius sign of travelling, aims, style, design, fashion, ornamentation, thinking, playgrounds and the most important astrological indicator for composition as the faculty of understanding the right place and role of the single elements that a piece of art consists of. In regard to a recording studio Sagittarius can be called the rounding up factor. I have no doubt that Sagittarius is the ideal factor for a recording studio to be used for creating highly elaborate concept albums such as Genesis` “The Lamb Lies down on Broadway”. But it can be taken for granted that places in Sagittarius also support improvisation and spontaneous easy rhythms. In regard to the song “Stairway to Heaven” Sagittarius as the sign of arcs, bows and circles can be assumed to have supported the “round dance” and the harmonious and for a piece of rock music comparatively rich ornamental structure within the song.

The astrogeographical latitude coordinate of the Headley Grange Estate  lies right between air sign Libra sign of relationship. love, balance, beauty, decoration, naive paintings, angels and highly alert, defensive water sign Scorpio the sign of sculpting, photography, visualization, imaging, welding, alchemy, construction work and in regard to the position of a recording studio an indicator for the process of working out the details of the recording. In relation to the song lyrics of “Stairway to Heaven” Libra stands for the naive angelic outlook on relationship as a stairway to heaven whereas Scorpio as the sign of dependence and the traditional hierarchies in role behaviour stands for the disillusion of the naive outlook on relationship. As the sign of social conditioning hierarchy and patterns of belief systems Scorpio stands for the original function of Headley Grange as a poorhouse.

In Jimmy Page`s birth chart the pathway described by Robert Plant`s lyrics as “Stairway to Heaven” is to be identified by the Mars-Uranus conjunction in the initial degrees of air sign Gemini the sign of bridges and in exact astrological resonance with the topics of the Bron-Ar-Aur stairway and even more so with the astrogeographical position of the Basing Street Studios. Especially for Jimmy Page the Basing Street Studios played a most important role because this is where he recorded (grounded) the final magical version for the song`s lead guitar parts.

Step 3: The recording of the song at the Basing Street Studios which is located between Taurus and Gemini too

The recording of “Stairway to Heaven” commenced in December 1970 at Island Records‘ new Basing Street Studios in London.

Astrogeographic position of the Basing Street Studios  for morphogenetic field level 4 which describes the atmosphere and energetical situation of the house itself: one coordinate falls right on the same astrogeographical position as the Bron-Yr-Aur cottage located right between earth sign Taurus and air sign Gemini. I can`t avoid finding the coincidence of the positions of the Basing Street Studios and  the Bron-Ar-Aur cottage between Taurus and Gemini really magic. The second coordinate is fully in Gemini which as shown above represents the astrogeographical indicator of the heaven referred to in the song.

For a recording studio practical and neutral air sign Gemini the sign of ears, hearing, listening, grasping, handling and the passing on information, technology, curiosity, experiments and practical solutions and bringing different elements together emphasizes the technological approach to recording, listening and optimization of the sound, music and lyrics.

In the alchemy of the 4 band members it is the really magical drummer John Bonham born with the Sun in Gemini on 31 May 1948 who is to be considered as the bands representative of the Gemini archetype.

Boleskine House located around 20 miles south of Inverness on the south-east side of Loch Ness in the Scottish Highlands was owned by author, occultist, spiritist, astrologer, magician, painter Aleister Crowley from 1899 to 1913 and of Led Zeppelin guitarist Jimmy Page between 1970 and 1992. The manor was destroyed by fire on the night of December 23, 2015. According to information given in the wiki article at “... 1:40 pm on 23 December 2015, a motorist on the A82 road reported flames and smoke coming from Boleskine House. When fire crews attended, it is estimated up to 60 percent of the building had already been incinerated, with flames rising up to 20 ft high.”

Astrogeographic position of the Boleskine House  for morphogenetic field level 4 which describes the atmosphere and energetical situation of the house itself: located in emotional water sign Cancer the sign of feeling at home, emotional individuality and authenticity, motherhood, and the moon. 2nd coordinate in highly alert, dynamic male fire sign Aries sign of action, warfare, fighting, ignition, sports, erection.

Cancer fell in house 8 of Jimmy Page`s` birth chart and near the position of the Moon at 4° Cancer indicating the appeal of an imagined but foreign self-image of being a person in contact with the fascinating, magical, surrealistic, occultistic experience of a jack of all trades crowleyism and personified beast 666.

Physical Graffiti was Led Zeppelin´s sixth studio album. It was released as a double album on 24 February 1975 by their newly founded imprint label Swan Song Records. The band wrote and recorded eight new songs for the album at Headley Grange.

On the path of the Stairway to Heaven the forces of physical gravity represent what keeps us from taking off and flying away or else what helps us ground what we imagine as our heaven. Since Taurus (income, money, markets, grounding) represents the sign of physical gravity and Gemini the sign of writing, script, language, information and graffiti as such the wordplay between Physical Gravity and Graffiti refers to finding an approach or technique of working that combines writing lyrics with market success.

The facade of the houses 96 and 98 St. Mark’s Place, New York was used for the cover of the Led Zeppelin album Physical Graffiti a wordplay which astrologically

Astrogeographic position of 96 and 98 St. Mark’s Place, New York for morphogenetic field level 4 which describes the atmosphere and energetical situation of the houses itself:  The astrogeographical longitude coordinate lies between earth sign Virgo sign and air sign Libra with the midpoint on the cardinal divide of 0° Libra the topic of a weather divide and also the initial degree of all topics related to stage performances. The astrogeographical longitude lies in the center of air sign Gemini one of the tow significators for the Led Zeppelins stairway to heaven.

Over the hills and far away

I thought that listening to the song Over the hills and far away written at the Bron-Yr-Aur cottage in 1970 and published on the Houses of the Holy album was a nice way to round up an analysis of the “Stairway to Heaven” illusion. Enjoy!!!

2 thoughts on “Led Zeppelin`s Stairway to Heaven in Astrology”