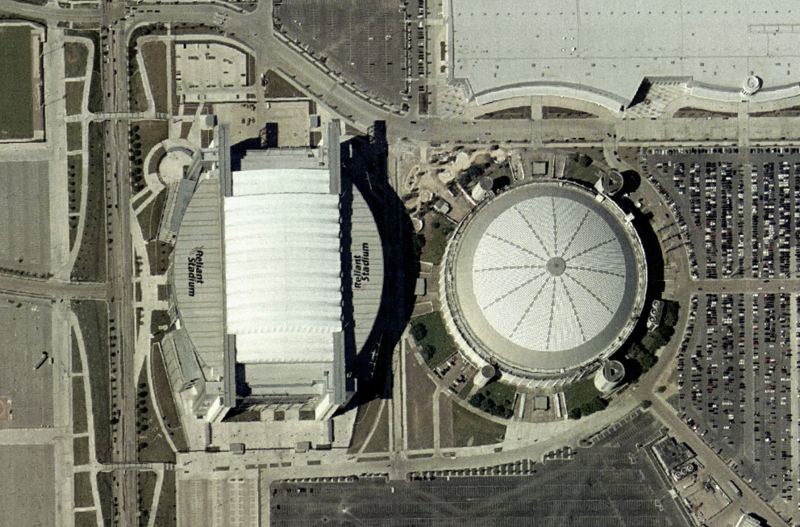 Aries as the Sign of Unicellular Structures: Astrodome & Co. Astrology, astrogeography, architecture and design: typical elements of design in Aries.

Compare: Astrology and architecture: characteristic features of Aries,  Libra as the sign of symmetry, Eiffel Tower and Field of Mars located in Aries.

Aries as the Sign of Unicellular Structures: Astrodome & Co

Astrogeographical position of the Astrodome for morphogenetic field level 3 (surrounding area) which describe the energetical topics of the whole of the construction area and surrounding car parks: both coordinates are in dynamic, one-dimensional, male fire sign Aries, sign of action, speed, warfare, fighting, ignition, mobilization , competition and sports. Considering the round form and dome it makes me think of it´s character as resembling a unicellular organism. This role of Aries as the initial, first astrological principle relates it to the smallest and most basic element of materia.

This affinity of Aries to the smallest particles can be observed also in the example of the large hadron collider at the CERN institute which is also situated in Aries.

Temppeliaukio Church in Helsinki in Aries with Sagittarius

Temppeliaukio Kirkko in Helsinki, Finland, is a thrilling work of modern architecture and another fascinating example for the reflex of Aries to concentrate on a single, individualized center.  The structure was built in 1969 entirely underground with a ceiling made of copper wire.

The Trelleborg Viking Ring Fortress built around 1000 AD near Slagelse in Denmark. Astrogeographic position: in the last degrees of the highly alert, dynamic, male fire sign Aries the sign of action, warfare, fighting and indicator of the fortress character.  2nd coordinate in air sign Gemini the sign of technical solutions, communication, teaching and learning  and indicator for the position of the fortress at a road crossing. Valid for field level 3.

Newgrange (Irish: Sí an Bhrú) is a prehistoric monument, passage tomb, temple, in County Meath, Ireland. Dated around 3200 BC. Astrogeographic position: in the combination of the magnetic royal fire sign Leo the sign of the Sun and the male fire sign Aries indicator of a new start and a typical sign for the places of graveyards and also an indicator for heros and warfare. Valid for field level 4.

Castel del Monte, Puglia, South Italy is a legendary fortress built in the form of an octagon around 1250 by Emperor Frederick II

Astrogeographical position for morphogenetic field level 3: the construction site is located in highly alert male fire sign Aries sign of action, speed, warfare, soldiers, mobilization, military purposes and indicator for the stronghold character. Aries stands for the round shape and reduction to a unicellular, one-dimensional round building here.

The 2nd coordinate is in practical air sign Gemini the sign of road crossings, intelligence, information, messengers, communication, spies, symbols, sign posts and indicator for the strategically important position of Castel del Monte for the control of the roads and passages in the region.

Royal Albert Hall and Memorial, London.  Astrogeographic position: the midpoint of Royal Albert Hall is located at about 0° of the highly profitable earth sign Taurus sign of grounding and indicator for the dome here. The north half lies in the dynamic fire sign Aries the sign of unicellular organisms while the south half is in Taurus. 2nd coordinate is in the defensive water sign Scorpio another indicator for monostructural buildings and close-up containers. Taurus can be understood as a more mellow, friendly aspect added to the fortress character of the two highly alert signs Aries and Scorpio here.  Valid for field level 4.

The rather erect, dominant aspect of Aries: Tibidabo Temple Expiatori del Sagrat Cor (Sacred Heart), on Tibidabo Mount –  512 m above Barcelona, Spain. Astrogeographic position: in highly alert, male fire sign Aries the sign of warfare, ignition and action and indicator for the erect fortress character and tower like structure of the building. 2nd coordinate in t air sign Gemini sign of sign posts, road crossings, communication and indicator for the strategical importance of the site. Both valid for field level 4.

The Radcliffe Camera at Oxford University was built in 1737-1749. It is the earliest example of a circular library in England. According to Wikipedia, J. R. R. Tolkien remarked that the building resembled Sauron’s temple to Morgoth on Númenor.

Astrogeographic position for morphogenetic field level 4 (exact position) which describes the energetical topics of the building itself: located in the dynamic fire sign Aries the archetypal sign and of unicellular organisms, The 2nd coordinate here is in strict, conservative, hierarchical earth sign Capricorn the sign of government institutions and an important indicator for the conservational aspect of libraries. Field level 4.

Fang Yuan Building in Shenyang, China is a 100 m tall tower in the shape of a traditional Chinese coin completed in 2001.

Astrogeographic position for morphogenetic field level 4 (exact position) which describes the energetical topics of the building itself: the building is located in highly dynamic male fire sign Aries sign of action, speed, unicellular organisms, towers, singles, mobilization and in mystic spiritual water sign Pisces sign of imagination, illusion, entertainment, Pisces stands for the realization of an round building in a design that goes without a functional purpose.