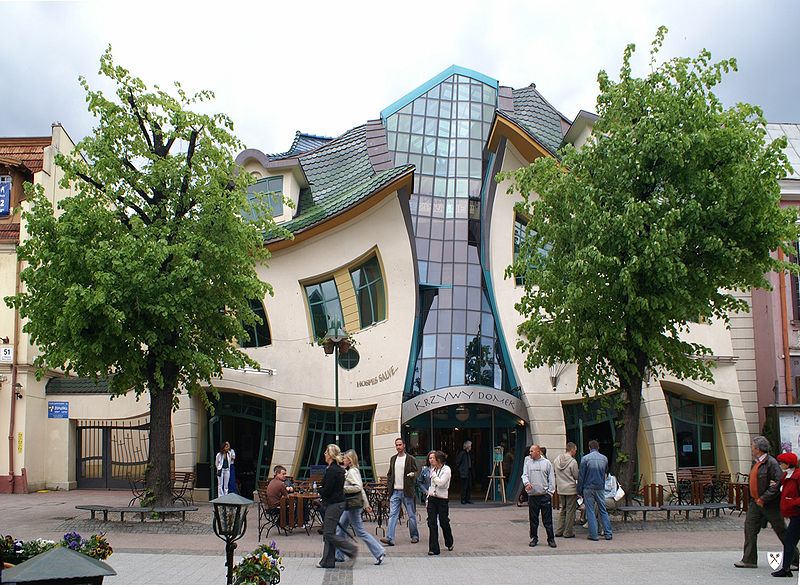 Related articles: Box-like forms in Virgo, On the astrology of Hobbitland,

The Crooked House and other objects of art in Virgo

The Krzywy Domek (Crooked House) is a famous architectural object and shopping centre in the city of Sopot in Poland constructed in 2003. It is situated in the astrogeographical combination of earth sign Virgo with fire sign Aries. This is valid for morphogenetic radius/field level 4 which describes the building itself. It was designed by Szotyńscy & Zaleski, who were inspired by the fairytale illustrations and drawings of Jan Marcin Szancer and the ‘Sopot in Drawings’ cycle by Per Oscar Dahlberg.

Searching for traits of the sign of Aries the sharp edges of the windows, doors and roof, representing male and agressive elements of form mark the clearest detail of form that stands for Aries here. Compare my article: Characteristic features of Aries.

The correspondence of Virgo with houses conceived and designed as pieces of art is so frequent that it should be noticed as symptomatic of a particular aspect of this sign. There could be all kinds of approaches to explaining why Virgo would host art projects. In this blog i will try to trace some of them.

In order to evaluate the position of the “Crooked House” in Virgo it may be helpful to consider that the concept of design here is not focused on a classical concept of harmony as it would be the case with the neighbouring sign of Libra. Virgo is not focused on dishamony either, but there is a tendency for defensive neglection or even active opposition to expectations and habits of perception. Because of the subject of the rebellion against dependency which in Virgo results from the habit of dependence, Virgo as far as places are concerned, rather is to be seen as a site for modernity and not for classical art. The root of the word “classical” relates to the definition of social classes in the tax system in ancient Rome. Classicism in art is related to standards of style and expression which are directly or indirectly related to the differentiation of higher from lower social classes. Modernity as an approach of seeking independence from given standards and limits of expression, given hierarchies among artists and from the past in general does not necessarily have to be anticlassical. But Virgo as the sign of the slaves like no other sign except Aquarius stands for a basic situation of being an outcast, although the first habitual reflex in Virgo is to subjugate to the caste systems, where it is Aquarius` habit to flee from it.

In the case of the “Crooked House” the contrast to a concept of a “normal” or “classical” building is a major element of style. It is a rebellious concept and it hints at Virgo as being a rebellious sign.

Virgo surely doesn`t stand for the reflex to search for new ideas, experiences or perspectives but rather for the reflex to optimize the handling and the management of already existing resources. This may explain how and why Virgo seems to be related to seek subsidy and sponsoring as a financial basis for creativity.

Virgo stands for natural spirits and entities such as dwarfs, gnomes, elves and trolls. This is really interesting here because the shape of the front part is a clear allusion to houses of gnomes or hobbits like they have been illustrated in children`s books. It sort of creates the allusion that there were trees or rock formations forcing the architect to build the house in this shape.

Virgo does not particularly stand for the approach to beautify buildings, and often quite the opposite is the case. Places in Virgo do often show traces of defense, of not wanting to exhibit the inside and of neutralising the effects of the surrounding area. This is a particular trace of places in Virgo: that people may not want to spend time or money here and that the design and the feeling of a place would not suggest that they should. Virgo does not invite people to come into a house and entrances may be smaller than in other signs.

The constellation of the site for the larger morphogenetic radius/field level 3 the level of the surrounding larger area has to be considered with this building too. Not because the building itself is not tall or large. But due to the function it has to host a shopping centre it is intensely interactive with the sorrounding area. The constellation here for field level 3 is in highly profitable earth sign Taurus and in the magnetic fire sign Leo, both signs highly attractive to visitors. Taurus because it stands for town centres and market places and Leo because it stands for inviting people to enjoy themselves and have fun.

Summary: The Crooked House for radius level 4 is situated in Virgo, the sign of savings which does not particularly stimulate the business and flow of money in a shopping centre. But because the constellation of the surrounding area (radius level 3) may be felt as highly stimulative and attractive for customers, it can be evaluated as a possibly profitable project for shopkeepers to run their business here.

Here are more examples for art in architecture situated in Virgo: Steel House in Ransom Canyon, Texas
The Steel House was built by a sculptor and architect named Robert Bruno over a period of 23 years out of steel and glass in the constellation of Virgo with Cancer. This is valid for astrogeographical radius level 4 which describes the building itself. If we search for traits of the sign of Cancer here the first idea could be comparing the house to a snail shell. Palais Idéal
The “Palais idéal” in Hauterives, France was built by a postman named Ferdinand Cheval who spent 40 years on this project in the constellation of the earth sign Virgo with the fire sign Sagittarius. This is valid for the astrogeographical radius level 4, which describes the building itself. A reflex to be examined here which is highly symptomatic of the sign of Sagitarius is the decoration and ornamentation down to the smallest detail (until the arrow hits the target).

The famous Dali Museum in Figueras, Spain just like the “Palais Ideal” was built in the constellation of Virgo with Sagittarius for astrogeographical radius level 4. Particularly vivid features of the Sagittarius here are the balls and the round or curved shape (form of a bow) of the building corners. The “Gehry Tower” is an office building designed by Frank Owen Gehry in Hannover, Germany. It is situated in the constellation of the earth sign Virgo with the air sign Libra. This is valid for the astrogeographical radius level 4 which describes the building itself. Like in the case of the “Crooked House” its design represents a stylistic incongruity of any traditional, regular or symmetrical shape of a house. photo:Mirko Junge license:ccbysa2.0  Turning Torso located in Virgo with Leo
The “Turning Torso” in Malmö, Sweden designed by Santiago Calatrava who was born on 8 July 1951 with the Sun in Leo is the highest scyscraper in the whole of Scandinavia. It was built in the constellation of the earth sign Virgo with the fire sign Leo. This is valid for the astrogeographical radius level 4 which describes the building itself. The concept of design has some similarity with Gehry Tower. The apparent turning of the building around its own axis has been worked out further here.