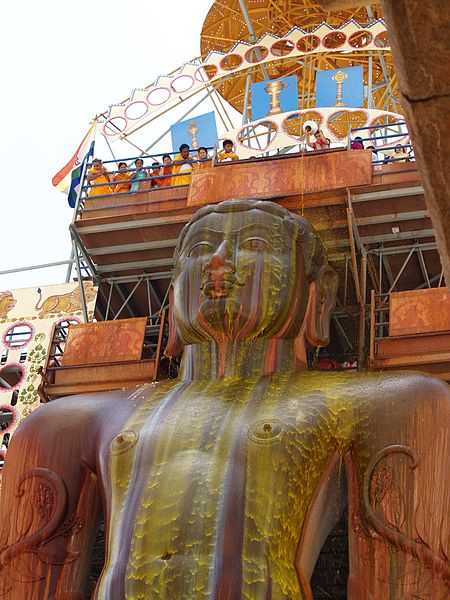 Taurus and Scorpio – A Bath of Milk and Honey. Astrology, sacred sites and sculpting: The hill of Shravanabelagola with the 10th century statue of Sri Gomateshvara

Sri Gomateshvara Bahubali is a sacred 10th century temple statue on the mountain of Shravanabelagola (“The Monks on the Mountain”) in the Indian state of Karnataka. It consists of a 18m high sculpture, carved out from the granite rock of the mountain. It is considered to be the largest free-standing sculpture of its kind worldwide. The mountain is considered to be a very old site for meditation of monks of the Jain religion and their predecessors.

About Jain religion: according to Jain religion all living beings are eternal soul – intrinsically perfect and immortal. Souls in transmigration (saṃsāra) are said to be embodied in the body like in a prison and therefore  experience birth and death. Jains believe that non-absolutism (anekantavada), non-violence (ahimsa) and non-attachment (aparigraha) are the means to liberation from the cycle of births and deaths. Liberated souls are worshiped as God in Jainism. Jain texts postulate an eternal universe. rejecting the idea of a creator or destroyer god.

Astrogeographic position for morphogenetic field level 3 which describes how the construction site of the statue is embedded in the landscape: The place is situated in the constellation of the two highly solid, fixed zodiac signs Taurus and Scorpio both indicators for the colossal form of the statue.  Earth sign Taurus corresponding to the earth, grounding, growing roots, food, grains, cows, agriculture in general, market places and wealth suggesting the site of a cult for the benefit in agriculture and trade.

Water sign Scorpio the sign of sculpting, imaging and the construction, stone masonry and blacksmith trades is the opposite sign of Taurus in it`s role as the sign of farmers. And as the sign of transformation Scorpio is the main astrological indicator for chemistry, alchemy, welding and the amalgamation of different elements of food during the annual Maha Masthaka Abhisheka ritual.

Taurus is the indicator for the food in the fascinating sacrifice and purification rituals during the Maha Masthaka Abhisheka ceremony, the main ceremony of the temple. On this occasions large quantities of milk, honey, ghee and herbal extracts are poured over the entire statue. Through this bath the statue is charged with the life energy of milk and honey while the liquid food substances are being transformed into a kind of divine nectar.

If the date and hour provided by Martin Gray is correct it is highly probable that the date and hour of the consecration of the magical statue of Sri Gomateshvara was elected by astrologers. As can be seen an auspicious moment was chosen when Jupiter occupied the position of 27° Taurus a degree of highest fruitfulness and income in the sign of agriculture, food, wealth, grounding and growing roots. Jupiter`s position in the fourth house indicating a place just below the monumental statue and at the same time occupying one of the two astrogeographical coordinates of the site.

Jupiter`s exceptionally positive position in regard to the stability and grounding of the statue at the site in Taurus the fixed sign of the material plane is combined with an intensely strong position of Neptune the ruler of mystic, spiritual water sign Pisces the sign of the spiritual plane near mid-heaven. Neptune so takes the highest position among the 12 major systemical planets of the 12 houses. And his role  as the ruler of the Sun and the Moon in water sign Pisces is to bring the “baptizing” effect of the reconnection with the spiritual plane to the top (and crown chakra) of the statue. This constellation when at work would ideally support and secure the flow of energies between the above and the below or heaven and earth. The flow of energies between the earth and sky is also supported by the ascendant in Aquarius and the position of it`s ruler Uranus in house 11 the natural astrological indicator for the stratosphere.

But then at the same time there are extremely intense square aspects (aspects of tension) between Mars and the Moon and also Jupiter and Mercury. As these 4 astrological planets were relatively easily observable and known to the astrologers at the time in case of an electional horoscope their aspects must have been taken into account.

The temple of Sri Gomateshvara is one of numerous examples for astrogeographical constellations where Scorpio appears as the sign of the stone-masonry and blacksmith trades together with large or even colossus-like sculptures.