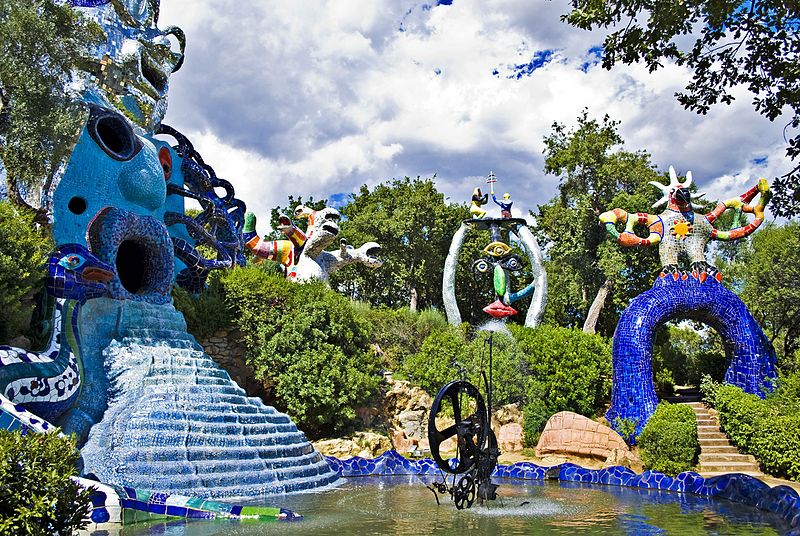 Giardino dei Tarocchi the Garden of Tarot is a sculpture garden based on the esoteric tarot created by the French artist Niki de Saint Phalle in Pescia Fiorentina, in Tuscany, Italy. The installations were begun in 1978 and the park opened to the public in 1998. Niki de Saint Phalle is said to have been inspired by Antoni Gaudí´s Parc Güell and Parco dei Mostri, Palais Idéal by Ferdinand Cheval, and Watts Towers by Simon Rodia in the creation and design for her sculpture park.

Astrogeographical position of Niki de Saint Phalle`s Tarot Garden for morphogenetic field level 4 which describes the atmosphere and energetical topics of the central sculptures and buildings: the coordinate for the astrogeographical longitude lies between earth sign Virgo sign of gardening, parks, protection of nature and air sign Libra sign of angels, harmony, balance, beauty, decoration, relationship, dancing, stage performance and the most important indicator for naive painting. The longitude coordinate is fully located in Libra.

Libra stands for an atmosphere of openness an not of critical judgement. The naivity of the plumpness of the designed sculptures who are presented by their faults and problems rather than through a design orientated at the mainstream media reflexes of aesthetic competition and elegance creates an atmosphere of guilelessness which leaves the space open for the goodwill aspect of Libra – like in children`s paintings. This preference might be felt as a tendency to reduce the fuller impact of the symbolism of the archetypes of tarot to mere elements of decoration. But then these sculptures do not overwrite and not even really caricature the magician, high priestess and wheel of fortune. The archetypes of the big Arcanas appear as transferred from the realms of esoteric meaning into a sphere that searches for their more practical and emotional relevance.

The presentation of such kind of a tarot at a site with the astrogeographical position in Libra the sign that so often depends on mainstream judgement of aesthetic vision is definitely a provocation and even emancipation for that sign. As far as Niki de Saint Phalle is concerned she made use of a stage here that fell in houses 11 and 12 in her birth chart stimulating inspiration, self-finding, self-liberation, abstract visions, reconnection with ones fuller potentials and being without or at least with less pressure through personal judgement and self-criticism.

Niki de Saint Phalle was born at sunrise with the sun and ascendant in Scorpio the sign of sculpting, imaging, photography, visualization, trauma, handicaps. The enormous size of the sculptures, their plumb forms and the large tubes are elements of style directly related to fixed water sign Scorpio.

The „Palais Idéal“ in Hauterives, France was built by Ferdinand Cheval who spent 40 years on this project using material he found while riding his postman`s bicycle along the countryside roads of the region.

Astrogeographical position for morphogenetic field level 4 which describes in atmosphere and energetical topics of the construction site itself: the house is located in earth sign Virgo sign of gardening, parks, saving money, conservation, mummification and recycling. The second mental fire sign Sagittarius sign of style, design, fashion, composition, ornaments. searching, travelling, hunting and accidentally finding materials, A symptomatic reflex of Sagittarius that can be observed here is the decoration and ornamentation down to the smallest detail (until the arrow hits the target).