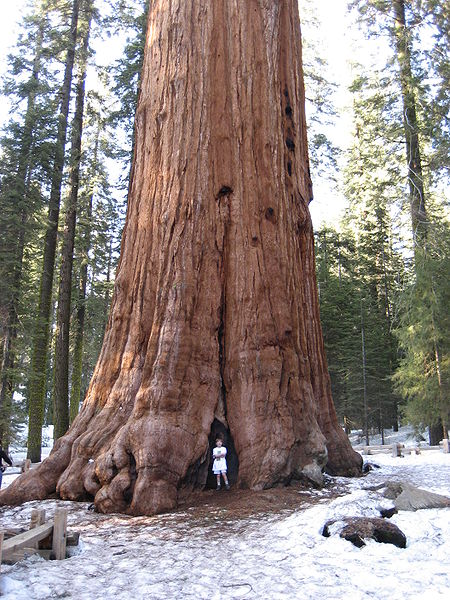 Compare: The tree of Life, Árbol del Tule with the stoutest trunk of any tree in the world, Bristlecone Pine Forest: Sagittarius as the Sign of Conifers, The largest Cashew tree on the planet, General Sherman Tree, The Tree of Life in astrogeography, Santa Barbara’s Moreton Bay Fig Tree, The Chapel Oak in astrogeography, Zoroastrian Sarve or Cypress of Abarkhu.

General Sherman tree is a giant sequoia tree located in the Giant Forest of Sequoia National Park in Tulare County, California. It is one candidate for the largest known living single stem tree on Earth. It is estimated to weigh more than 1900 t – his circumference is 32 m at the ground and the height 83 m.

Astrogeographic position for morphogenetic field level 4 which describes the energetical situation and atmosphere of the tree itself: one coordinate lies in solid, conservative earth sign Capricorn sign of control, stability, tradition, rocks, history and an indicator for a comparatively prominent location and solid ground. The second coordinate lies in mystic, spiritual, timeless water sign Pisces the sign of the dream world, temples, legends, fairy tales, reconnection with the spiritual plane and an indicator for a relatively undisturbed and relaxed sphere. As a water sign Pisces may indicate the presence of underground water below the tree. Both coordinates of the tree fall right in the middle of the signs.

The Name in field resonance

Names can be resonators in a number of ways. In astrogeographical field study I read names as signs of the topics of places. As information is transferred through the resonance field and its potential as a morphic field such signs are always symbolic even though the underlying topics of place are often overwritten by the names that have been attached to them. Trying to read and understand the level or sphere of resonance is part of the quest in field study.

There are several resonating aspects of the astrogeographical position of the magical sequoia giant with the birth chart constellations of William Tecumseh Sherman: first of which is the conjunction of Pluto with Saturn the astrological rulers of the most stable, solid and durable signs for manifestations in the material world: Capricorn and Scorpio. The oldest known temple on the planet lies in that sign combination: The Mountain Sanctuary of Göbekli Tepe. The name for the sequoia giant resonates with this fundamental long-lastingness aspect in general Sherman´s chart. Then there is Venus the astrological factor for social recognition, fame and possession of territory at 18° Pisces which resonates with the exact position of General Sherman Tree.