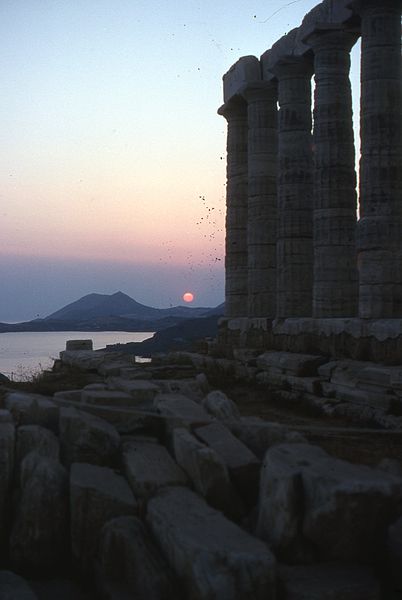 Gods of Planets: Temple of Neptune in Aquarius with Sagittarius

Gods of Planets: Temple of Neptune in Aquarius with Sagittarius at Cape Sounion
The astrogeographic position of the construction site of a temple explains it´s function but not necessarily the god that´s worshipped.

Related articles: The Birth Place of Hermes on Mount Kyllini, The birth place of Poseidon,  Oracle of Delphi, Ancient Greek oracle places and the magic of prediction in ancient greek culture,The Birth place of Zeus in Jupiter`s sign Sagittarius, Three Steps to Mount Olympus, The Temple of the Eleusinian Mysteries, The Tower of the Winds in Athens, Temple of Neptune in Aquarius with Sagittarius, Aphrodite`s Temples and Birth Place in astrogeography. Greek Gods in astrogeographical field study

The Temple of Poseidon (Neptune), the greek god of the sea at Cape Soúnion south of Athens was built around 440 BC.

Astrogeographic position for field level 4 which describes the atmosphere of the construction site and of the temple itself: the Temple of Poseidon is not  located in Poseidon`s (Neptune) own sign Pisces but next to Pisces in it`s neigbour spiritual air sign Aquarius sign of the sky, heaven & reconnection with the spiritual plane and indicator for the site on top of a cliff overlooking the ocean. The temple therefore is not a site where one goes to be in Poseidon´s realms but to contact them  from nearby. Aquarius takes the god of the sea to the open air and sunlight here.

The 2nd coordinate is located in dynamic, mental fire sign Sagittarius sign of lookouts, watching, ornamentation, style and design. Sagittarius is the sign and indicator of the priest castes. Therefore the temple site has also a lot of potential for having been used as a shamanistic place for intiation and sacrificial rites or cremation in the times of pre-classical greek culture as well as after.  Although in some regards an aspect of tension to Pisces Sagittarius can be evaluated – maybe together with water sign Scorpio – to represent the closest relative of Pisces among the 12 signs. In modern astrology Neptune (Poseidon) has taken over the rulership  over Pisces from Jupiter (Zeus) who now rules only in Sagittarius. The conflict between Poseidon and Zeus in regard to the dominant position as the  ruler of the gods is reflected at the temple site at  Sounion in the fact that Poseidon`s temple is located in the sign ruled by Zeus (Jupiter). This may simply mean that Poseidon´s temple was built in a late period of greek mythology when Zeus had taken over the rule over the gods. Thus Poseidon´s temple was built in a place where he is  naturally subdued to Zeus.