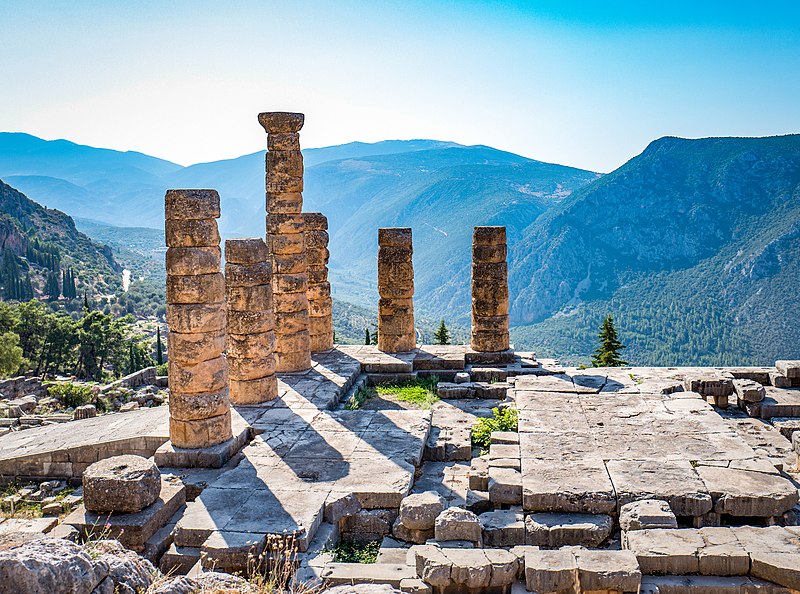 Related articles: Ancient greek oracle places,  The Temple of the Oracle of Apollon Claros, The birth place of Poseidon,  Aphrodite`s birth place and the Temple at Aphrodisias, The Birth place of Zeus in Jupiter`s sign Sagittarius, Three Steps to Mount Olympus, The Temple of the Eleusinian Mysteries, The Tower of the Winds in Athens, Temple of Neptune in Aquarius with Sagittarius, The Birth Place of Hermes on Mount Kyllini.   Sacred Lakota Site Bear Butte,

The Sanctuary of the Oracle of Delphi in astrogeography

The sanctuary of the Oracle of Delphi (also Pythia) was one of the holiest temples and the most important oracle in the history of ancient Greece.
It occupies an impressive site on the south-western slope of Mount Parnassus, overlooking the coastal plain to the south and the valley of Phocis.

Astrogeographical resonance coordinates of the sanctuary of Delphi for morphogenetic field level 3 which describes the energetical topics and atmosphere of the whole area of the Delphi temples: one coordinate of the site is situated in dynamic, male fire sign Aries sign of action, speed, warfare, soldiers, clear descisions, mobilisation and the sign of starting new projects. The 2nd coordinate lies in service orientated air sign Libra the sign of openness, consultations, harmony, balance, justice, sensuakl perception and diagnosis.

The legend of Delphi explains how these two poles were brought together at Delphi:  When Zeus wanted to determine the center of the earth he sent out two eagles from both ends of the world. The place where they came together was Delphi. The exact location of their meeting in the sanctuary of Delphi is marked by the omphalos (navel). This place was regarded as the center of the world.

This description of the meeting of two projection lines uniting the two ends of the world, the masculine and feminie pole corresponds very well if not to say perfectly with the astrogeographical constellation of Libra with Aries here. What we conclude here from astrogeographical verification is that the coming together of these 2 elements of polarity in Delphi is to be considered as an ideal and harmonious meeting.

The name Delphi is derived from the word δελφός (Delphos) for “womb” and indicates that this was originally a place of worship for the earth goddess Gaia. Another legend describes how this happened: After the serpent Python had been created by the earth mother Gaia she settled down in Delphi and practiced her clairvoyance here. Later her head was chopped off by Apollon, so that her blood spilled on Delphi and thereby contributed the gift of clairvoyance onto the site itself. From about the 8th Century BC the worship of Apollo became predominant and the oracle began to develop. The Temple of Apollo became the seat of the oracle.

Although Libra is seen as a feminine principle, an equation of the sign with the Earth Mother Gaia is not valid, so that the sanctuary of Gaia at Delphi was not located in one of Gaia`s own signs, namely Taurus (Earth, Demeter) or Cancer (Uterus, Hera). These ideal astrogeographic aspects (Cancer & Taurus) for a shrine of the Earth Mother could be expected at temples of Hera and Demeter. Libra would be seen as related with Aphrodite, which in terms of the significance of shrines would indicate love and wedding rites but not fertility (Cancer) or agricultural (Taurus) rites. This may be taken as an explanation why the cult of Gaia could not be maintained at Delphi.

Although an interesting aspect for the site of an oracle, Libra does not primarily stand for the motif of the clairvoyance practised by the oracle but could indicate subtle perception and diagnosis of the cases of each single person seeking advice here. Besides it could indicate, that in addition to the passing of the message, which was often described as in the form of a mystery, there could have been some form of advisory or consultation service for the understanding of the word oracle practised here. Libra as the principle of mirroring and of social interaction in general should be regarded as a particularly favorable aspect for the site of a consultancy. Likewise, Libra could be classified as a reflection oracle just as if the questioner would look into a diagnostic mirror.

Aries on the other hand would indicate that the form of the oracle´s message could have been one-dimensional and released without explanation. Furthermore, Aries as the ruling principle of warfare stands for the importance of the oracle of Delphi which had to be consulted before going the war. The coincidence of Aries with it`s opposing sign Libra at a site for the consultancy about warfare can be judged as highly favourable because Libra as the sign of openness, negotiations, justice and peace could render opposing aspects to those of simply relying on one`s military strength and determination (Aries).

In regard to the intoxicating gases or other drugs, that have been suggested as important for the delphic oracle, it should be noted that if the combination of Aries with Libra were to be examined as a possible hint at their use here Libra – as an air sign would stand for the gas – Aries as a fire sign could resonate with the energetical impact of that gas. For comparison: Pisces, as the sign of the unconscious, dreaming and intixication like at the location of the temple of the Eleusinian Mysteries and Scorpio as the sign of poisons, could be the first astrological indicators to stand for the use of drugs.

Apollon has been considered as an aspect of the Sun God so that his astrological equivalent would naturally be Leo. In regard to the masculine aspect of Delphi in Aries it is the sign of the ram that has to be associated with Apollon in the form of a warrior here.

I made a  list of ancient greek oracle places for comparative study. as you can see greek oracles occured in different constellations. Gemini  the sign of practical, technical information and traditionally called the sign of disbelief does not occur. Positions in Pisces the sign of temples and indicator for the spiritual plane are surprisingly rare while Scorpio the sign of the underworld occurs only in the case of the famous skiff oracle of Siwa.