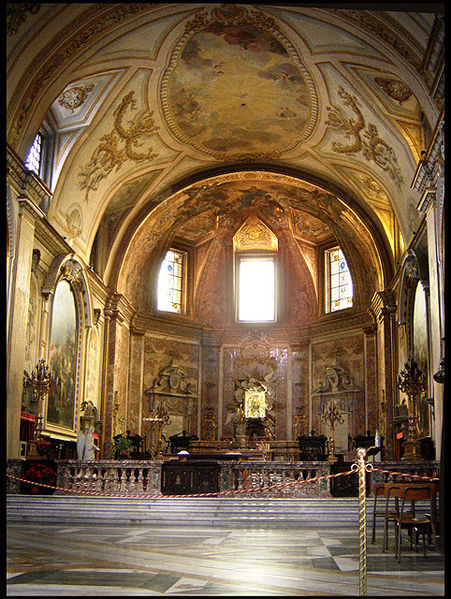 Related articles:  The “Little Mermaid” as a Guardian, Heaven`s Gate on the point of the winter solstice, Bighorn Medicine Wheel  The Palm Jumeirah, The Guardian Fountains on Place de la Concorde, Golden Gate Bridge, Fushima-Inari-Taisha and the gate at 0° Capricorn,

The Basilica of St. Mary of the Angels and the Martyrs was built in the late 16th century inside the ruined frigidarium in the Roman Baths of Diocletian on Piazza della Republica in Rome. A frigidarium is a pool of cold water typical for roman baths. The basilica is dedicated to the Christian martyrs, known and unknown.
It was constructed in the 16th century following an original design by Michelangelo Buonarroti. Other architects and artists added to the church over the following centuries. During the Kingdom of Italy, the church was used for religious state functions.

Astrogeographical position for morphogenetic field level 4 which describes the energetical topics and atmosphere of the church itself: one coordinate is located in creative, innovative air sign Aquarius sign fo the sky, heaven, paradise, self-finding, reconnection with the spiritual plane, self-liberation, emancipation and the strife for freedom. Aquarius directly relates to the aspect of martyrs here as outsiders and victims of society who suffered and were killed for their political opinions, idealism, religion, faith and minority status.  The choice of the site of the frigidarium relates to the topic of the suffering of the martyrs from torture and raping and thus to the psychological and karmic resonance of frigidity with physical pain. An important example for a church dedicated to martyrs and located in Aquarius is the Basilica of St. Ursula and her 11.000 companions in Cologne, Germany.

The 2nd coordinate of  the Basilica of St. Mary of the Angels and the Martyrs is located right on the cardinal divide of the winter solstice between fire sign Sagittarius the sign of priests, initations, priests, circles, cycles, round shapes, time measurment and solid. conservative, strict, hierarchical earth sign Capricorn sign of control, impediments, walls, rules & regulations, state dogma and cult. The divide between hot fire sign Sagittarius and cold fire sign Capricorn stands for the site of the cold water pool as a place of confrontation of the warm water bath with the cold water experience. Capricorn relates to the use of the church for state functions. Another important roman temple located in Capricorn that was used for state functuions since early roman times was the Temple of Saturn at the foot of Capitoline hill.

Astrologically frigidity is a symptom strongly related to the astrological signs Capricorn as the sign of impediments, drieness and coldness and to Aquarius as the sign of non-duality and non-sexuality.

“At the beginning of the 18th century, Pope Clement XI commissioned the astronomer, mathematician, archaeologist, historian and philosopher  Francesco Bianchini to build a meridian line, a sort of sundial, within the basilica. Completed in 1702, the object had a threefold purpose: the pope wanted to check the accuracy of the Gregorian reformation of the calendar, to produce a tool to predict Easter exactly, and, not least, to give Rome a meridian line as important as the one Giovanni Domenico Cassini had recently built in Bologna’s cathedral, San Petronio.” (from the wiki article)

The 0° Capricorn cardinal divide is the point of the solar year when the sun occupies its most southern position from the point of view of the Northern Hemisphere. It marks the shortest solar day on 22 December of each year. The date is also called the “birthday of the sun” as from this day on the sun will be shining longer every day until it reaches 0°Cancer the sign of fertility on the day of the summer solstice.

The planetary spheres and the 12 twelve zodiac signs are also depicted on the church floor.