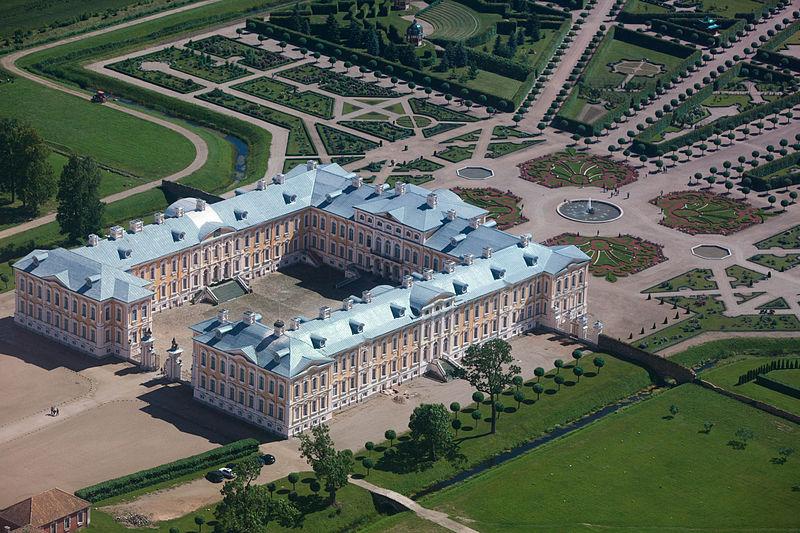 Rundale Palace the Baltic Versailles in Virgo. A short astrogeographical evaluation of the position of Rundale Palace

Rundāle Palace (Schloss Ruhental) in Latvia is a baroque palace built by the windy Ernst Johann von Biron (born 23 Nov 1690)  Duke of Courland  and husband of Empress Anna Ioannovna of Russia  (born 7 Feb  1693) between 1736 and 1768.

Astrogeographic position for morphogenetic field level 3 which describes the atmosphere of the whole of the palace and park area: the coordinate for the astrogeographical longitude lies in homely, emotional water sign Cancer sign of the moon, motherhood, emotional independence and authenticity and a possible resonator of English park culture. The 2nd coordinate – just as is the case at the original Versailles Palace – is located in self-protective earth sign Virgo the sign of reason, health, nature, protection of plants, parks and gardening.

Jelgava Palace (Schloss Mittau)  the largest Baroque-style palace in the Baltic states also built by the windy Ernst Johann von Biron was designed by Russian-Italian architect Bartolomeo Rastrelli.  Its construction was begun in 1738 and completed in 1772.

The construction site of Jelgava Palace is located on the south end of a 4 km long island in the middle Lielupe River.

Astrogeographic position for morphogenetic field level 3 which describes the atmosphere of the whole of the palace and its small park area: the construction site has one coordinate on the first degree of highly relaxed, mystic, spiritual water sign Pisces sign of imagination, legends, dreaming, hiding, the otherworld, music and art and in case of palaces an indicator for a summer residence.  As a water sign Pisces is the indicator for the construction ground in the river bed.

The 2nd coordinate lies in solid, stable earth sign Taurus sign of profits, grounding, growing roots, food, possession of territory and market places. Taurus is no indicator for aristocracy, art or courtly culture but rather for agriculture and the bourgeois caste. As a fixed sign it represents the indicator for the monumental size of the palace.