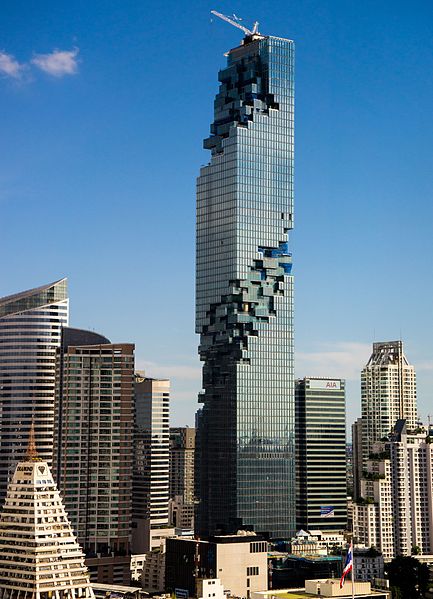 MahaNakhon skyscraper and a spiral winding up around a square building

Astrology & Architecture: MahaNakhon skyscraper and the symbolic meaning of a spiral winding up around a square building

Related articles: Astrology & Architecture: shaft, bow and balls in Sagittarius, Box-like forms in Vrgo,  Architecture, Astrology & Places: Zaha Hadid, The Egg on top of Dali´s House in Cancer – and other examples for Cancer as the sign of eggs and the uterus, Cancer as the Sign of Seashells in architecture, The polarity of Aquarius with Scorpio, Astrology and architecture: characteristic features of Aries, Aries as the Sign of Unicelular Structures: Astrodome & Co, An astrogeographical history of skyscrapers,

MahaNakhon is a 314.2 metres tall  mixed-use luxury  skyscraper located in the Silom/Sathon central business district of Bangkok, Thailand. Designed to fit into the Thai landscape with a unique pixelated facade, It features the unconventional appearance of a glass curtain walled square tower with a cuboid-surfaced spiral cut into the side of the building. The design was created by german architect Ole Scheeren and Office for Metropolitan Architecture.

The symbolic meaning of the spiral carved into the facade of the square tower structure is that inside of any square object, building or even mind there works an ascending force or logic that moves in circles (or cycles) around its center thus symbolically overcoming squareness.  For my personal background this aspect is also interesting in regard to the fact that the design was created by a german architect, as german thinking and culture has often been referred to as square.

Astrogeographic position of MahaNakhon for morrphogenetic field level 3 which describes how the construction site is embedded in the surrounding area and City: The resonance coordinate for the astrogeographical latitude falls right on the cardinal divide of the summer solstice (21 June) between air sign Gemini and water sign Cancer. Gemini`s role as the sign of signposts, information, communication and learning reflects the authenticity of the effort made to present the architectural design as a signpost for the direction of development and innovation in the region.  It is symptomatic that the construction of the MahaNakhon tower was begun on a 20 June (2011) when the Sun was located right next to the degree of the summer solstice.

Cancer`s influence on buildings is to be seen in a stabilizing effect for their being accepted by the local people. This is because Cancer supports feeling at home and the emotional identification with new buildings and landmarks. For individuals it stimulates emotional independence and authenticity and quite frequently appears as an almost essential condition for modern architecture.

As the sign of the uterus Cancer seems to naturally support round forms and domes in architecture. Two of the largest domes ever built: the Pantheon in Rome (Cancer-Sagittarius) and the Hagia Sophia (Cancer-Taurus) in Istanbul are clearest examples for that.

But although Cancer may prefer round to rectangular forms – it does not depend on them as much as for example Cancer`s square sign Libra or it`s opposition sign Capricorn.  Considering the topic of the spiral around the square tower in relation to the position of the tower between Gemini and Cancer it can be concluded that Gemini as well as the astrogeographical longitude coordinate of the site in Libra stands for the rectangular form here.  In this sense  the path of the spiral that mills itself upwards breaking the r ectangular shape of the facade may be interpreted as manifesting Cancer´s individualistic comment on the functionalist architecture of such skyscrapers.

The coordinate for the astrogeographical longitude of MahaNakhon tower lies right in the middle of service-orientated, liberal air sign Libra sign of harmony, balance, symmetry, peace, beauty, decoration, openness, relationship and angels. In regard to architectural design the astrogeographical position of places in Libra appears to have a strong tendency to support the construction of square (the climax of symmetry) or rectangular buildings. Compare: Libra as the sign of symmetry in art & architecture.