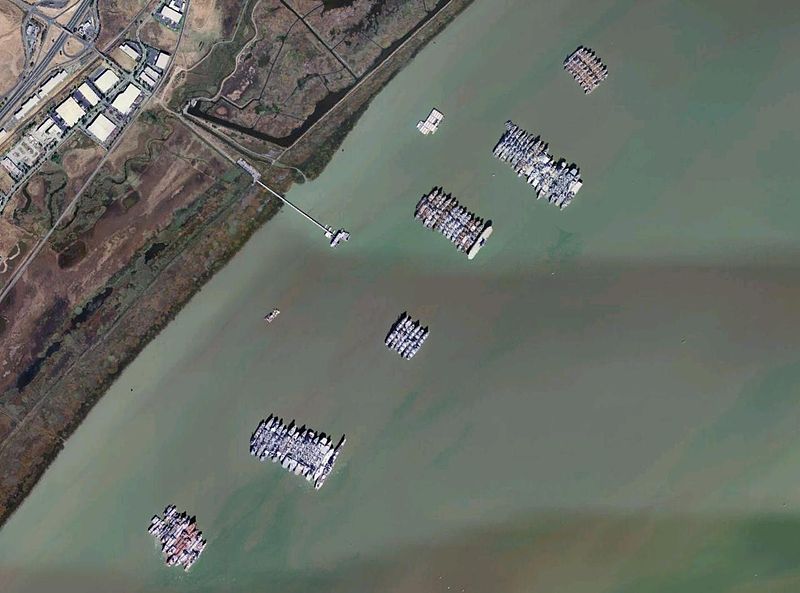 Ships are built to pass safely through the realms of Neptune. That also means they combine two confronting spheres Pisces (the realms of the ocean) and Virgo (protected and dry spaces)

Dry land or open sea, mummification or corrosion: the combination of Pisces the sign of the ocean with its opposite sign Virgo the main indicator for harbours perfectly describes the two aspects of the place where the American reserve fleet ist stationed. Virgo is an indicator for a cleverly calculated and relatively cheap storing of the ships in a comparatively safe site, whereas Pisces as major indicator for museums and as the sign of the otherworld stands for the realms of a ghost fleet.

Virgo´s role as the sign of mummification in astrogeographical field study can be observed at the sites of the Great Pyramid at Giza (Virgo-Gemini) and the Valley of the Kings (Virgo-Aquarius).

Astrogeographic position of the central and largest part of the ship graveyard for morphogenetic field level 3 which shows how the site is embedded in the San Francisco area: located in self-protective earth sign Virgo sign of preservation, mummification, harbours, storing goods, caution, reserves, dry land, holding back, waiting and long-term strategical planning.
The 2nd coordinate lies in relaxed, spiritual water sign Pisces sign of hiding, corrosion, dissolution, letting go, sea, fish, ships, hiding, sleeping, dreaming, the otherworld, the unconscious, mystification, legends and the definite indicator for superstition. This role of Pisces is symptomatic for the sailor`s superstition and not only the imagination but even the actual  dwelling  of ghosts on deserted ships.