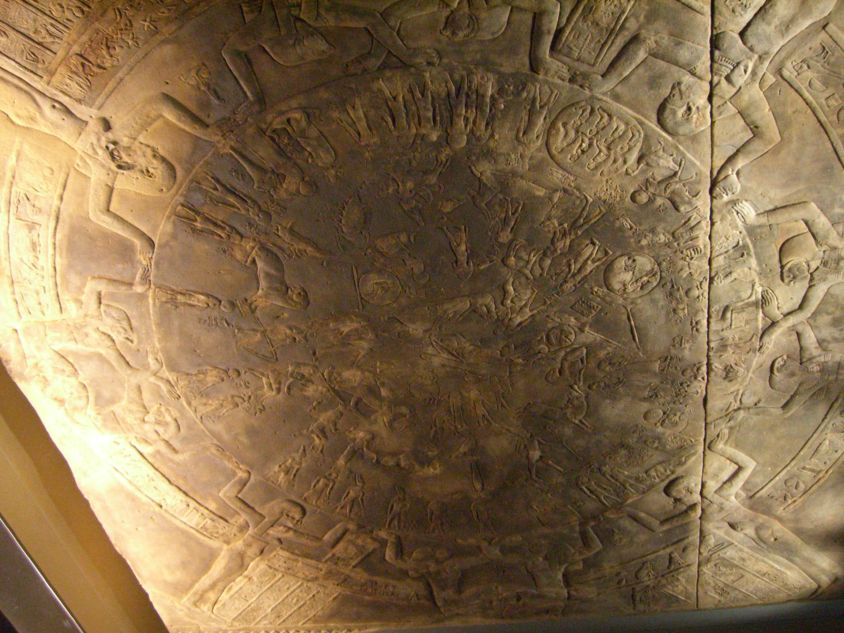 Astrology and Sacred Sites: The Temple of Hathor at Dendera

The Hathor Temple at Dendera is a 275 m square temple complex whose construction was begun during the reign of pharao Nectanebo II between  360–343 BC. It is dedicated to the “cow goddess” Hathor.

Astrogeographic position  of the Temple of Hathor for morphogenetic field level 4 which in this case describes the atmosphere, energetical situation and topics of the central inner temple only:: the midpoint of the central inner Temple of Hathor is located right on the divide (0°) between the solid, conservative, hierarchical earth sign Capricorn the sign of control, rocks, mountains, government institutions, exactiude, rules and regulations & creative, innovarive, spiritual air sign Aquarius the sign of the sky, heaven, paradise, self-finding, abstraction and reconnection with our fuller potentials and inspiration.The astrogeographical position between the 2 spiritual signs Capricorn and Aquarius indicates places where the highest places on earth meet with the sky. This is because the last degrees of Capricorn stand for mountain tops while the first degrees of Aquarius indicate the air just above so that we are dealing here with the place where earth and sky meet. A temple on such a place has the potential of making it possible to reach for the sky or if we say it the other way round: to ground inspiration from the skies. In regard to the Dendera Zodiac the position of the temple between Capricorn and Aquarius can so be considered as the relevant astrogeographical explanation for the historical importance of the Dendera Zodiac for “grounding  the zodiac” in cultural history.

The 2nd coordinate of the inner temple lies in self-protective earth sign Virgo the sign of the harvest season, preservation and mummification, health care,, food, protection of nature and plants, self-protection, monasteries, celibacy and austerity, gardening and an important factor for agriculturla sciences.

Astrogeographic position of the temple for morphogenetical field level 3 which describes how the whole of the temple area is embedded in the landscape: for morphogenetic field level 3 the whole temple complex is located in the constellation of warfare consisting of highly alert, male fire sign Aries the sign of action, speed, fighting, strongholds, the warrior castes and warfare together with conservative, traditionalistic, strict earth sign Capricorn the sign of government institutions, control, the ruling classes, rules and regulations and important indicator for hierarchical structures. This could indicate that the site was selected for the temple as a place of worship and sacrifice for the kings and soldiers before going to war. The combination of Capricorn with Aries is frequent particularly for the oldest temples in Egypt. Although the Hathor Temple is from a comparatively recent era it is assumed that older temples here date back as early as 2250 BC. The combination of Capricorn with Aries at important temple sites is symptomatic of the earlier stages of the estanlishmanet of a kingdom and its culture.

The Pyramid of Djoser built around 2650 BC is the oldest egyptian pyramid and an example for the position of an early egyptian temple built right in between earth sign Capricorn the sign of mountains and air sign Aquarius the sign of the sky. The second coordinate here is lies in earth sign Taurus sign of the land and possession of territory, grounding, growing roots, the earth itself and in case of temples and indicator for the topics of agriculture, food and ealth.. Both aspects are valid for morphogenetic field level 4:

Another important example for the combination of Capricorn with Aries in early egyptian temples is Sneferu`s Bent Pyramid at Dashur built around 2600 BC. The constellation could simply indicate a time when the egyptian empire wasn´t settled enough

Hathor between Libra and Taurus

Hathor is a goddess related to love, beauty, joy, motherhood, fertility, birth, foreign lands, mining, music and the sky which relates her to the Libra aspects (beauty, love, dancing and the sky) of Venus and in some aspects (motherhood, fertility) to a Moon goddess. Beauty is of course a highly relative thing and it often leads to discussion among astrologers which sign is the most beuatiful. But the attempt to decorate, beautify, ornament, display and understand the commons sense of beauty in design and fashion is what relates Libra to beauty  more any other sign. The aspects of the sky and foreign lands rather exclude Hathor`s identification with the Taurus (sign of agriculture) half of Venus. On the other hand the cow would be the clearest indication of that sign.  Because of the importance of agriculture for Egypt the fact that Hathor is not related to the domains of agriculture is another factor which rather excludes her relationship with Taurus than it would stand in favour of it. Mining because ruled by Virgo would relate her to Virgo although love, dancing and beauty because of self-protective Virgo`s reflex of chastity wouldn`t.

The sculptured Dendera Zodiac is a relief on the ceiling of the portico of the Osiris chapel of the famous Hathor temple at Dendera.  It shows the basis for the definition of the zodiac as it is still in use in astrology and astronomy today.  Construction of the chapel was begun in the late Ptolemaic period and its portico added during the reign of emperor Tiberius (14 AD – 37 AD).

The Dendera Zodiac is the first known complete map of the ecliptic. It depicts an “ancient sky” and has been a basical standard for astronomical and astrological observations since the time it was created. According to the wikipedia article: “Sylvie Cauville of the Centre for Computer-aided Egyptological Research at Utrecht University and Éric Aubourg dated it to 50 BC through an examination of the configuration it shows of the five planets known to the Egyptians, a configuration that occurs once every thousand years, and the identification of two eclipses”:

“The solar eclipse indicates the date of 7 March 51 BC: it is represented by a circle containing the goddess Isis holding a baboon (the god Thoth) by the tail.” (from wiki article)

“The lunar eclipse indicates the date of September 25, 52 BC: it is represented by an Eye of Horus locked into a circle.” (from wiki article)