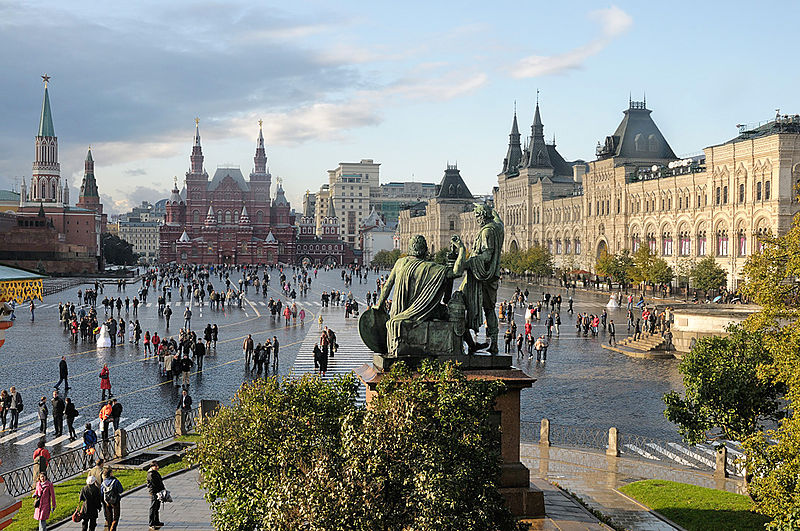 Like a number of other large squares on this list “Black Lives Matter Plaza” is an important place of nation-wide political protest. The name was given to a section of 16th Street in front of the White House in Washington DC by Washington`s Mayor Muriel Bowser on June 5 2020 after a violent attack by police forces on a peaceful demonstration against the Killing of George Floyd by white police officers on May 25 2020..

Astrology and Places: Red Square, Moscow, Russia. Astrogeographic position: together with the Kremlin the Red Square is located in the constellation of the service-orientated, open air sign Libra the sign of the horizon, of symmetry, balance and beauty together with the conservative, traditionalistc, highly defensive earth sign Capricorn the most important indicator for government institutions and for public control over places. Valid for morphogenetic field level 3.

The name Trafalgar Square in London commemorates the british naval victory in the Napoleonic Wars and a center for political demontrations since the 1880ies. Astrogeographic position: in the constellation of the highly attractive, emotional, royal fire sign Leo the sign of individual right for emotional self expression and energetic centers together with the aristocratic, peaceful, liberal air sign Libra the sign of aestetics and the reflex to beautify the surroundings.

Tiananmen Square (Place of Heavenly Peace) in the chinese capital Beijing is named after Tiananmen Gate – the gate to the imperial Golden City on the north end of the square located in Aquarius the sign of Heaven and the sky. Astrogeographic Position: The midpoint lies directly on the line of the divide between the creative, political air sign Aquarius the sign of being outside of buildings in the open air and the highly imaginative, relaxed water sign Pisces. Both signs are the main indicators for open, uncontrolled spaces. 2nd coordinate is in the mental fire sign Sagittarius the sign of decoration, ornamentation and of playgrounds and indicator for the “search for luxury”. This is valid for morphogenetic field level 3 which describes how the square is embedded in the surrounding area.

Xinghai Square, Dalian, China, is the largest city square worldwide (1000 m long) located to the north of Xinghai Bay. Its name literally means “the Sea of Stars” and this is reflected by a 150 m wide five star in the center of the square. Astrogeographic position: in between the fire sign Sagittarius the sign of decoration, ornamentation, luxury and playgrounds and indicator for the round shape of the square and the formalistic, strict earth sign Capricorn indicator for government institutions and public control over places. The 2nd coordinate is in the highly defensive, hierarchical water sign Scorpio. Valid for field level 3.

Merdeka Square, Jakarta with the “National Monument” in its centre is the second largest city square worldwide. Astrogeographic position: in the constellation of the conservative, traditionalistic earth sign Capricorn indicator for government institutions and public control over places together with the emotional water sign Cancer the sign of emotional identity and identification and a major indicator for emotional authenticity in modern art and architecture. Valid for field level 3.

Macroplaza is an 800 m long and 110 m wide strip in the centre of Monterey, Mexico. Astrogeographic position: the midpoint of the square is located on the line of the divide between the aristocratic air sign Libra the sign of openness, relationship, symmetry, decoration and beauty and the water sign Scorpio. The 2nd coordinate too is in the air sign Libra the sign of quadrangular shapes and of the reflex to beautify the surroundings. Valid for field level 3.

St. Peters Place, Vatican, Rome, Italy. Astrogeographic position: located in the combination of the fire sign Sagittarius the sign of decoration and the priest castes and indicator for the round shape of the square. The 2nd coordinate is located in the highly defensive, strict, traditionalistic and conservative earth sign Capricorn indicator for government institutions and strategic control over places. Valid for field level 3.

Leo for a royal palace and Pisces for a temple. Sanam Luang (“Royal Field”) in front of the Wat Phra Kaew Temple of the Emerald Buddha; and the Grand Royal Palace in Bangkok, Thailand. Astrogeographic position: in the highly magnetic and attractive royal fire sign Leo the sign of kingdom and royal palaces together with the relaxed, highly imaginative, mystic water sign Pisces a main indicator for open spaces and temples. Valid for field level 3.

India Gate in New Delhi commemorates the 70,000 Indian soldiers who lost their lives fighting for the British Army during the World War I. It is located inside of a large hexagonal square in the government area of New Delhi.

Astrogeographic position: the hexagonal India Gate Complex is located in the mental fire sign Sagittarius the sign of arches and of victory which is also present at the Arc de Triomphe in Paris. The 2nd coordinate is located in the emotional water sign Cancer the sign of emotional identity and identification and of being at home. Valid for field level 3.

Maidan Nezalezhnosti which means Independence Square is a central square in Kyiv, Ukraine. Just like Tahrir Square in Cairo it is located in the liberal air sign Libra the sign of meetings and of peace. The square has been the center of political protests in the country particularly during the Orange Revolution in 2004.

Astrogeographic position: in the liberal air sign Libra the sign of the angels, decoration, symmetry, balance and aesthetics together with the mental fire sign Sagittarius the second most important indicator for decoration, ornamentation, design and luxury. The constellation is valid for morphogenetic field level 3 which describes how the square is embedded in the city.

Since the starting of the demostrations and the uprising on January 25 2011 Al-Tahrir-Square in Cairo has been the centre of protest and revolution in Egypt. The astrological constellation here is in the mystic water sign Pisces with the peaceful air sign Libra. This applies to astrogeographical radius level 3 which shows how a place is embedded in the surrounding area.

The combination of these two signs indicates that the site really has all potential for a peaceful place and thus throws a really positive light on the demonstrations and the possible future that could arise from the events here. The liberal air sign Libra the sign of the angels and of peace together with Pisces the sign of the unconscious may even be called a mystic constellation. The Egyptian Museum on the northern side of the Square is situated in the same constellation. It hosts immeasurable treasures of ancient Egyptian art and history including the mummies of more than 20 pharaoes. Thus Al-Tahrir-Square connects modern Egypt with its glorious and fascinating history.

Taksim Suqare in the european part of Istanbul is the site of the Monument of the Republic which stands for the Indpendence of Turkey since 1923. The square has been the center of political protest, riots and the murder of left wing demonstrators on a number of occasions.

Astrogeographic position: in the constellation of the male fire sign Aries the main indicator for warfare and aggression together with the profitable earth sign Taurus the sign of town centers and market squares and rather an indicator for agricultural and economical centers than for political discussions.

Jamaa el Fna, the “place in front of the mosque” is the picturesque vibrant heart and main market square in the medina of Marrakech in Morocco. Although in the grip of tourism today it is still famous for its active concentration of traditional activities by storytellers, musicians and performers.

Astrogeographic position: Jeema el-Fna is located in the highly attractive, magnetic, grand royal fire sign Leo the main indicator for doing what we do for pleasure and indicator of energetic centers with the highly defensive water sign Scorpio the main sign of nomadic cultures and an indicator for the traditional cattle market here. Valid for field level 3.

Times Square named after the New York Times building is New York`s central square not only on New Year`s Eve. Astrogeographical position: in the combination of the innovative, individualistic and highly political air sign Aquarius which stands for progress and new developments together with the mental fire sign Sagittarius a main indicator for thinking, understanding, caricature, style, design and luxury. The constellation is valid for radius/field level 3 which describes the role of Time Square for Manhattan..

Place de la Concorde is the largest square in Paris. Astrogeographic position: located in the combination of the air sign Aquarius indicator for free and open spaces inside the city with the earth sign Taurus the sign of town centers and market places.