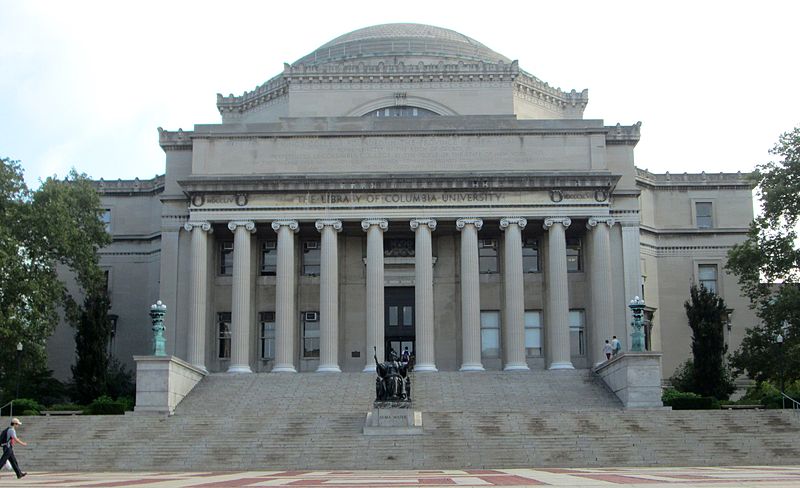 On the astrogeography of institutions

Astrogeographical measurement of morphogenetic fields can reveal the inner structures of fields in the landscape. Research done through mapping larger institutions can help understand how the single parts of the institutions differ from each other – how they relate to each other and which influence they exert on the whole organism of the institution. At the same time for the research done on astrology we can learn more about the different faces that the 12 structural elements aka the 12 zodiac signs take when combined with each other.

Columbia University was first established as Kings College in 1754.

Astrogeographic position  of the whole of the Morningside Heights Campus for morphogenetic field level 3 (surrounding area) which describes the atmosphere and energetical topics of the whole of the campus area: the astrogeographical latitide coordinate stretches from practical air sign Gemini, the sign of language, communication, information, technology, learning, education, schools, curiosity, intelligence, experiments for the north half into emotional water sign Cancer the sign of the moon, motherhood, feeling at home, the uterus, emotional individuality, independence and authenticity, cultural modernity and self-centeredness, melody and melancholy for the south half. In regard to science Cancer relates to an emotional approach to logical thinking which moves step by step and with a tendency of an intuitively mathematical conclusion. The opinion that Cancer is not capable of thinking or of logic as such is actually a mistake. Cancer may be thought to move forward slowly – but in fact whenever it has taken a step the knowledge gathered can be highly convincing for further conclusions as long as they move in the same direction. I have often felt highly impressed by the exactitude of results in “Cancerian” thinking and intuition. If we consider the strong emotion Cancer has for any musical note we can understand in which way a single note (or thought) can include a whole field of a  particular emotional topic. To me Cancer is the sign of melody in such a way that it relates to the content described by melodies. Cancer may not need to follow the structure of the melody of a song because it feels where the logic of an emotional pattern moves.  That particular element makes Cancer less compatible for gossip or mere dry intellectualism. But at the deeper end of  mathematics as well as of semantics where numbers or letters have meaning Cancer can deal with that aspect without confusing the different layers of significance.

Saying that Cancer in its role as the sign of motherhood could formally be represented by the Alma Mater sculpture in front of Low Memorial Library may be found a bit too short and too simple. But astrogeographically speaking the statue directly incarnates the local field goddess of the morphogenetic field around the Morningside Heights Campus.

The 2nd coordinate lies in highly imaginative, relaxed Pisces sign of the spiritual plane, dreaming, getting absorbed in the imagination of a particular topic. The position in two water signs stands for an energetically self-centered institution and the atmosphere of an area that is not overloaded or too heavily influenced by the energetical impact of the mega-city that surrounds it. In fact both signs Pisces and Cancer are symptoms of places that appears relatively

Low Memorial Library was built in 1895 as the university`s central library as a neoclassical allusion to the 2nd century Pantheon building in Rome which is located in Cancer with Sagittarius.

Astrogeographic position of Low Memorial Library for morphogenetic field level 4 which describes the atmosphere and energetical topics of the building itself: one cooridnate is in  solid, conservative, exclusive, hierarchical, strict earth sign Capricorn the sign of control, government institutions, the ruling classes and patriarchs of society. Capricorn stands for the aims of efficiency, calculability, authority, relaiability, competence and expertise.

The 2nd coordinate lies in creative, innovative air sign Aquarius the sign  of the sky, heaven, paradise, abstraction, self-finding, inventions and the topic of reconnection with the fuller potentials of human ressources.

Butler Library is one of the two classicist library temples in the central axis of Morningside Heights Campus of Columbia University, New York. The other one being the older Low Memorial Library.

Astrogeographic position of Butler Library for morphogenetic field level 4 which describes the atmosphere and energetical topics of the building itself: the center of Butler Library is located right on the cardinal divide of the winter solstice and the astrological simile of mid-heaven at 0° in solid, conservative, strict earth sign Capricorn the sign of control, rules and regulations and of a check-post between the world of wishful thinking and of abstract reality. The resonance of this position makes Butler Library in some way seem like the energetical center of the exams commission.

The coordinate of the astrogeographical latitude lies in earth sign Taurus sign of the earth, grounding, gravitation, growing roots  making it in some way the market place of the  whole campus.