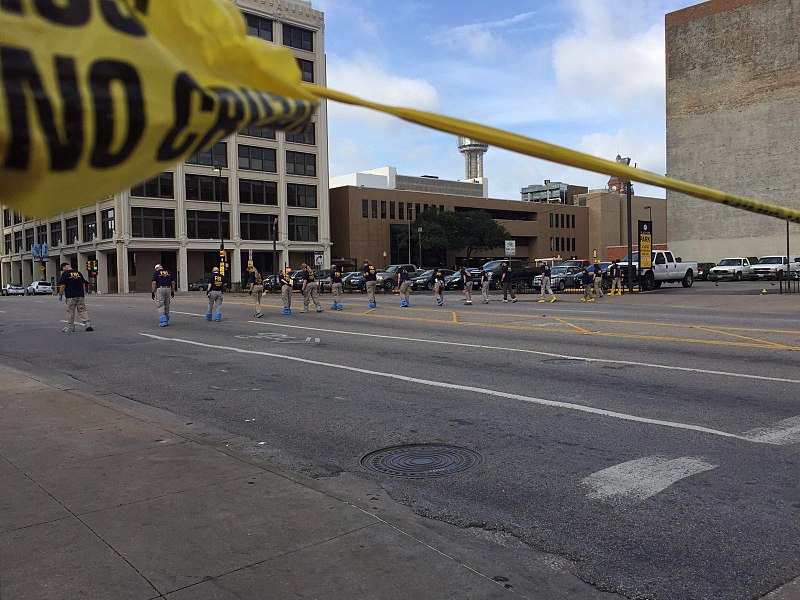 The Dallas Sniper Massacre & Shootings of Alton Sterling & Philando Castile. Astrology, Politics, History & Places: The Dallas Sniper Massacre, the shootings of Alton Sterling & Philando Castile and the question of the astrogeographical resonance with the problems caused by the lobbyism worked through the National Rifle Association

On July 7, 2016 at 20:45 five police officers were murdered and six others and a civilian injured by sniper fire in Belo Garden Park, Dallas, Texas. The shooting occurred at the end of a demonstration against police killings in the aftermath of the shootings dead of 2 Afro American men within the previous two days.   Alton Sterling was killed on July 5 in  Falcon Heights, Minnesota  and Philando Castile in Baton Rouge, Louisiana.

The Shooting of Alton Sterling

Astrogeographical position of Baton Rouge for morphogenetic field level 1 which describes the supraregional relevance of the incident:  one coordinate of the town lies at 18° Pisces and one at 16° Capricorn.

The astrogeographical  position of Baton Rouge at 16° Capricorn was occupied by Pluto at 16° indicating the resonance of unsolved traumatic social and/or ideological issues and the effects of high tension in the morphogenetic field. The 2nd astrogeographical coordinate of Baton Rouge at 18° Pisces was aspected by the exact opposition of Jupiter from 17°44`Virgo in house 12.

The shooting of Philando Castile

Philando Castile born on July 16, 1983 was shot dead on July 6, 2016, in Falcon Heights, Minnesota, a suburb of St. Paul. Details from the wiki article: According to Diamond Reynolds, Castile’s girlfriend, who was with him in the vehicle together with her 4 – year old daughter, before Castile was killed, he told  police officerYanez that he was licensed to carry a concealed weapon and had one in the car. Reynolds stated on the video that the Yanez: “asked him for license and registration. He told him that it was in his wallet, but he had a pistol on him because he’s licensed to carry. The officer said don’t move. As he was putting his hands back up, the officer shot him in the arm four or five times.”

Astrogeographical position of Falcon Heights Minnesota for morphogenetic field level 1 which describes the supra-regional relevance of the incident: the town of Falcon Heights is located at 0° of fire sign Aries and 22° of fire sign Sagittarius. The planetary transits were not exact here so that the event should not been seen as a discharge of tensions through energies stuck in the national morphogenetic field in the first place, but rather as an expression of the personal subjective situation of the killer.

Astrogeographical position for morphogenetic field level 4 which describes the atmosphere of the site itself: one coordinate lies in highly magnetic emotional fire sign Leo the sign of the Sun and emotional self-expression . The second coordinate falls in comparatively relaxed water sign Pisces the sign of the unconscious and invisible and of hiding. The astrogeographical positions of the site were occupied by the Moon in Leo and Neptune in Pisces.

The incident occurred while Pluto was rising right at the moment of sunset in opposition to the Sun which was exactly conjunct Mercury in Cancer. Pluto represents the police officer here. As the ruler of midheaven Pluto ruled also Mars in Scorpio in house 10 . As the Moon and Venus were in house 7 the house of relationship psychological problems related to love relationships should be investigated as the personal cause of the shooting. The constellations in house 7 represent the victim, his partner and her daughter.

On July 7, 2016 at 20:45 five police officers were murdered and seven others and a civilian injured by sniper fire in Belo Garden Park, Dallas, Texas. The shooting occurred at the end of a demonstration against police killings in the aftermath of the shootings dead of 2 Afro american men within the previous two days.   Alton Sterling was killed on July 5 in  Falcon Heights, Minnesota  and Philando Castile in Baton Rouge, Louisiana.

Astrogeographical position of Dallas, Texas for morphogenetic field level 1 which describes the supraregional relevance of the incident: one coordinate of the City of Dallas lies at 23° of earth sign Capricorn and one at 8° of water sign Scorpio.  The combination of highly alert, solid fixed water sign Scorpio the sign of group hierarchies, fortresses,  ambush, revenge and arms producing industries with solid, conservative earth sign Capricorn the sign of control, the ruling classes, government institutions, laws and regulations is known for its strong relation to hierarchical structures, ideologies and fascism.

The two incidents that the protests were related to had occurred while the Sun had been moving towards the exact opposition to Pluto. The terrorist attack against the police probably motivated by the desire for revenge occurred ore even as a radical political provocation when the Sun at 16°20`Cancer had just crossed the exact opposition to Pluto at 16°12`Capricorn “discharging” the tension accumulated in the national morpohogenetic field of the USA. The attacker is symbolized by Pluto and the victims by the Sun, Mercury and Venus in Cancer the sign of pain.

The position of Saturn in house 11 because located in Sagittarius the sign of aiming at targets and of shooting indicates that the sniper was operating from a place where he could overlook the scene.

On the day of the sniper attack Pluto had been  transiting the position of Neptune in Micah Javier Johnson`s birth chart for more than a year. Neptune represents the 12th organ or circuit in the nervous system in a personal birth chart. It so stands for the unconscious containing the true self and the eternal soul  together with all things uncleared, blocks of development accumulated and all pain and tension suppressed. Pluto`s role during this transit is to bring the suppressed aspects of the personality, the soul and the traumatic experience of an individual into the realm of perception in order to stimulate a process of transformation. If people are not willing or able to open up to transformational processes the projection of issues unsolved onto the surroundings,  other people or society are a means of avoiding to accept the individual karmic responsibility for the pain felt.

The Sun-Uranus opposition describes the karmic inheritance of a person born as an extreme challenge of the personal, subjective point of view through extra-subjective social, political and/or cultural conditions. If we assume the cause of the birth of a human to be the process of individualization of the of eternal undivided soul into single entities through the experience of innumerable reincarnations in the limitation of limited, singular living beings Uranus indicates the incapacity or undecidedness for self-liberation and self-finding as an individual during the course of the last incarnations. In Micah Javier Johnson`s birth chart the Sun in Cancer symbolizes the topic of learning to accept, realize and endure emotional individualization, self-responsibility and authenticity through cutting the umbilical chord of the habit of hiding within the emotional identification with a social institution or mother.  Uranus in Capricorn the sign of government institutions in opposition to the Sun in Cancer indicates habitual confrontation with the ruling classes, administration and social institutions. To imagine the impact of this Uranus confrontation with the Sun in Cancer remember that Cancer is the capacity of the within to feel and reflect the resonance of the outside world within the realm of individuality: Cancer is the sign of emotional pain.

The Mars , Venus, Jupiter conjunction in Micah`s birth chart fell in emotional fire sign Leo the sign of self-centeredness, self-esteem and emotional self-expression. Particularly Mars but also Jupiter in Leo points at the  topic of learning to live, endure and take over responsibility for individual self-expression. Leo is the sign of the shining light. In regard to individual emotions it indicates the topic of a  superiority complex of individuals and even of the fear of being killed if they are unable to live up to the demands of such an image of projecting  a superior personality. This psychological topic indicated by the three planets in Leo is under extreme pressure here through the square position of Pluto the planet of perception in Scorpio. Pluto`s position reveals a situation in which the social experience permanently questions the royal, successful superiority complex of the individual, thus periodically destroying that success.

The Responsibility of the National Rifle Association

Originally founded as an organization to advance rifle marksmanship  in 1871 the National Rifle Organization today is the main lobbyist organization of the gun producing industry in the USA responsible for the extremely high rate of murders in the country and the extremely negative impact on the american society as a whole, today used also to enforce US war propaganda and undermine positive, progressive and peaceful developments in US society.

The NRA was founded with the Sun in Scorpio and the Moon in Capricorn on 16 November 1871. The resonance of the position of the 2 most important astrological factors the Moon and the Sun with the astrogeographical position of Dallas also to be considered as the Sniper Capital of the USA (see: Assassination of J.F. Kennedy) is symptomatic.  The  exact conjunction of Mars with Saturn the constellation of professional soldiers and the soldier caste (kshatriya)  in Capricorn explains the employment of the NRA by the Ministery of Defense for war propaganda. The head office of the NFA is located around 25 km west of the Pentagon and the House of Congress of the USA in Washington.